I learned of the passing of Ustaz Azizan via this SMS alert by NST which I received earlier today,

My heartfelt condolences for Azizan's family. 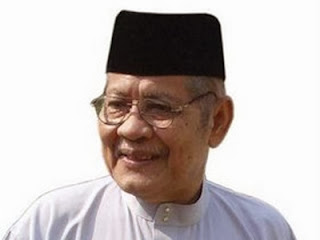 It is good that Mukhriz is the one who officially confirmed the passing of Azizan as what it should be when a former state leader dies and his successor being the one who makes it known to the public.

At a moment of bereavement like this, we need to set aside our political differences.

It has always been good to note that the rift between the Malays in Kedah has never been too severe despite the intense political battle between Umno and Pas from the run up to the 2008 GE until the post 2013 GE now.

The transition of power from Umno to Pas and back to Umno was relatively smooth with the exceptions of minor incidences.

Credit should be given to the moderate Malay leaders of the State, Azizan for Pas and Mukhriz for Umno.

True, they were some extreme elements on both sides but Azizan and later Mukhriz managed to rein them in and prevent things from getting too disruptive.

I'm not saying that everything were nice and rosy, but at least the Umno-Pas tussle in Kedah is nothing like those in Kelantan or Terengganu.

It was heart warming to note that Mukhriz had regularly visited the then hospitalized Azizan.

It's the respect given by a younger man to his elder, by a successor to his predecessor.

The respect accorded to Azizan by Mukhriz was well placed as the Pas leader had been a fair Menteri Besar and treated everyone, including the Umno people in the State with no prejudice.

He was so fair, that some Pas people rebelled against him and accused him of being too sympathetic to Umno people. They had even tried to topple Azizan for it.

Partly in response to that, Mukhriz apparently ensured the continuity of several good State government's policies initiated by Azizan. He didn't totally dismantle everything laid down by the Azizan's administration.

Azizan will be best remembered for being a good person and leader who tried his best for his fellow Kedahans.

May Allah placed him among the righteous.
Posted by Annie at 16:49