I have not yet watched the much talked about movie Tanda Putera.

Even if I had watched it, I don't think I should be the one to review it as I could be judged as a politically bias person due to my support for Barisan Nasional.

The person whose review of the controversial movie should be considered by Malaysians must be totally neutral. 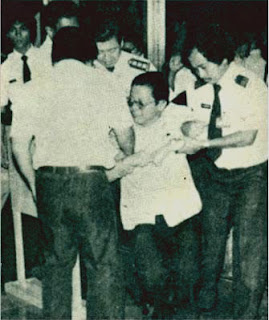 And for that, none other than NST senior writer Mr Dennis Chua should fit the bill.  Those who know Dennis will agree with me that he totally doesn't have any partisan political inclination whatsoever and is a most sincere and honest person. If you want to know more details on why I came to that conclusion about Dennis, please ask any of the NST journalists that you could come across (including those who support Pakatan). I'm quite sure they know why and will agree with me.

Here is Dennis' review of Tanda Putera which was published by NST two days ago,


Cinema: From a page in history


TO say that this is Shuhaimi’s most challenging film would be an understatement, as it is her labour of love to two of our greatest leaders.

Second Prime Minister Tun Abdul Razak Hussein and second Deputy Prime Minister Tun Dr Ismail Abdul Rahman saved the country from the political violence of 1969 and reunited the people with their vision, foresight, disciplinarian ways and teamwork.
Unfortunately, they were working against the clock. Both men were dying of serious illnesses: Dr Ismail of a heart ailment and Abdul Razak, of leukaemia. They were treated in secret by a mutual doctor friend, Dr Stewart McPherson.
Abdul Razak kept his illness from his loved ones and the country, so that everybody could focus on bringing the country forward with the New Economic Policy (NEP) that he and Dr Ismail had formulated.
Shuhaimi shot Tanda Putera in 10 months in 2011 (20 per cent in Britain), and picked the right actors for the roles — Abdul Razak (Rusdi) and Dr Ismail (Zizan).
Rusdi, who gave a memorable performance in Waris Jari Hantu and 1957: Hati Malaya, captured the essence of Abdul Razak’s indomitable spirit and looks every bit like the Father Of Development.
The same goes for Zizan, who also played Tun Dr Mahathir Mohamad in Tun Mahathir The Musical (2010). He learnt how to mouth a pipe and play golf with his left hand.
Shuhaimi and co-producer Kavita have, as in Hati Malaya, stayed clear from documentary style narratives and managed to bring much heart into Abdul Razak’s and Dr Ismail’s last years.
Most of the film shows how they impacted the lives of the people and how they juggled work and their family.
Fictitious characters Kara (Kavita), Allan (Yun), Aman (Riezman), Maimon (Kuza), Musa (Zaefrul), Zarah (Ika), Zaman (Ahya) and Johan (Zoey) humanise the challenges of the period.
A dose of trivia is slotted in various scenes, and the best is where Abdul Razak and Dr Ismail discuss the name of the national airline. At a dinner, Abdul Razak tells Dr Ismail that he has completed his “laughter quota”, a reference to the doctor’s serious demeanour.
Tanda Putera’s link to Hati Malaya is most evident with the presence of Kamarul as Tunku Abdul Rahman Putra. The Kelantan-born actor, who received good reviews in the 2007 film, is more subdued, but does a star turn when he tells some Western journalists to “go to hell” for misreporting in 1969.
Another star turn is Hasnul as Tun Hussein Onn. He holds his own when he tearfully announces the death of Abdul Razak.
Faezah and Linda add the required gentle touch as Abdul Razak’s wife Tun Rahah Mohd Noah and Dr Ismail’s wife Toh Puan Norashikin Mohd Seth respectively. Besides looking the part, they give their characters a balance of strength and emotion, especially when they learn the sad truths about their husbands health.
The list of supporting characters is the who’s who of Malaysian leaders and their families. They include Nazril (Dr Mahathir), Norman (Tun Hanif Omar), Shorthose (McPherson), Sahee (Datuk Seri Najib Razak), Razif (Ahmad Johari Razak), Ismaizal (Tawfik Ismail), Fizz (Tan Sri Arshad Ayub), Khir (Tan Sri Abdul Rahman Hashim), Ngasrizal (Datuk Seri Harun Idris), Razali (Tan Sri Ahmad Razali Mohd Ali), Chelsia (Puan Sri Catherine Tan), Nas-T (Najib Abdul Rahman) and Aidil (Tan Sri Senu Abdul Rahman).
Of the fictitious characters, Ahya stands out as school teacher Zaman who becomes Abdul Razak’s assistant. He is spotted by the leader while serving in his Felda village, and it is through him that we learn of Abdul Razak’s eye for detail, generosity, opposition to superstition, and penchant for punctuality and tidiness.
Kavita, Alan, Ika and Zoey nicely capture the climate of fear in 1969. In their pivotal scene together, they brave angry mobs hammering on Kara’s car as she ferries her students, Zarah and Johan, home.
While there are violent scenes of the riots, they are kept to a minimum to serve as backdrop to the turbulent period. The shootings of top officers and a terror attack on the National Monument aided by CGI are shocking, too.
Shuhaimi added wonderful CGI effects in the style of Forrest Gump, where the actors images are superimposed and blended into real footage of historical events.
Nevertheless, there are two glaring production mistakes in the logo of one political party and the Malaysian coat of arms.
Still, this film ought to be on every citizen’s “must watch” list for its historical significance. To date, it remains a strong contender for the top prize at the next Malaysian Film Festival.