ADVICE THAT WILL BANKRUPT THE NATION

The title, however, reminds me of another advise allegedly given recently to our current PM DS Najib Razak - "just ignore the pesky independent pro-BN bloggers".

I was told of this by a senior media practitioner who seems to know quite a bit about what's happening at the PM's office.

Who gave such an advice to the PM?

Well, his advisers, of course.

Yes, the very same advisers who are being constantly whacked these days by the independent pro-BN bloggers for allegedly giving stupid advises to the PM.

I think that sorts of explain why the advisers had advised the PM not to listen to the bloggers.

Well, I don't know whether the PM accepted that advise, but if he did, I do understand, because the PM himself has been quite heavily criticized by some of these independent pro-BN bloggers of late.

It was said that these PM's advisers had concluded that this type of bloggers who supposedly support BN but at the same time criticize the leadership of the coalition when they feel necessary were not worth to be considered as assets in facing the opposition.

They are too much of loose cannons and too hard to control.

They feel that easier to control teams of hired cybertroopers should take over the leading role in the cyberwar by BN against Pakatan from the bloggers including the most seniors among them. 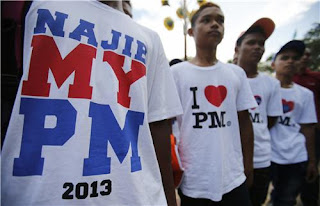 And of course these advisers will have better access to whatever budget to be allocated to finance the cyberwar against the much more coordinated Pakatan cybertroopers.

The PM's advisers were also said to have tighten their grip on the pro-BN mainstream media by placing their chosen ones to control those media organizations.

They were believed to soon gain complete control of the biggest media organization in the country, Media Prima through the power consolidation of their proxy there, a former boss of Utusan Malaysia.

It will be interesting to see how far these PM's advisers may go and whether we will have another "fourth floor crisis" such as the one which happened during Pak Lah's time as PM.
Posted by Annie at 00:12