For your dosage of such things today, I recommend you to read Helen Ang's Pakatan lose election petitions so they create their own ‘court’

"It is their typical oppo M.O. — simply accuse. The Pakatan politicians do it. Apparatchiks and operatives use it as their main tactic. Dapsters and Jerusubang cultists have Fitnah as a middle name."

Ok, as for myself, today I just want to reflect on how we celebrate Hari Raya these days in this country.

I'm for one is most uncomfortable with how Malay muslims resorting to practices similar to those of different race and faith while celebrating Raya.

The most obvious is the duit raya culture. I think everyone knows where this one originates from. Nowadays the kids will not wait for us to give them duit raya but instead will tell you in the face that they want it.

I don't think there is anything said in the Quran or hadith about duit raya.

Of late, there is even the practice of giving out gifts on Hari Raya, which I think is a copy of the Christmas culture.

Ok, there is nothing wrong with giving gifts to your loved ones or friends or neighbors, but aping others over such things is rather pathetic in my opinion.

That I think is the reason behind all the cock-ups such as the Santa Raya advertisement a few years ago. 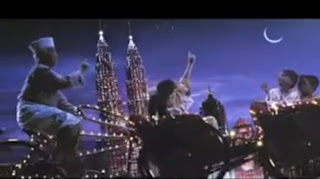 Then there are all those artistes taking centre stage in Raya celebrations. Just switch on the TV and you will find that the central theme of Hari Raya is entertainment dished out by artistes.

Some may accuse me of being a party popper, but really la, is that how Hari Raya was meant to be celebrated?

As I had always pointed out in my previous postings, I'm not  an Islamic  religious expert or even could be deemed as a devout Muslim, but I surely wish Hari Raya could one day be celebrated in this country the way it was originally intended to be.

Honestly, I'm myself not sure how Hari Raya should be celebrated according to the Islamic teachings. That's how deeply buried it was by all these foreign elements now dominating the way we celebrate Raya.

Maybe the alim ulama could give Muslims of this country some serious advice on the matter.

Not to force them into anything, but rather to educate them so that the true Raya culture, which I myself is not really sure what, could be slowly inculcated back to the mainstream psyche of Muslims in this country.
Posted by Annie at 06:47