A sincere apology to Muslims

I have always been skeptical of the sincerity of people who apologized to Muslims after they had maliciously thrashed the teachings of Islam.

There had been so many cases in the past where the apologies were clearly insincere and were offered just as an excuse for the offenders to escape sanctions against themselves.

However, when I read the report about Buddhist chief high priest K Sri Dhammaratana Nayake Maha Thera apologizing to Muslims over the Buddhists chanting in surau incident in Kota Tinggi, I feel that this time the apology was
genuine. 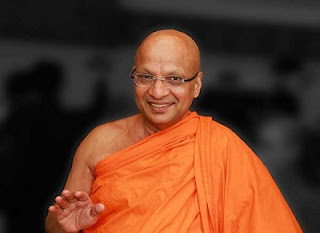 “We would like to apologise to our Muslim brothers and sisters for the actions of a certain Buddhist group from Singapore in having their meditation session at the surau of a resort in Kota Tinggi,” he said in a statement today.


“I advise Buddhists in Malaysia and Singapore to respect the religious sensitivities of other religionists while carrying out our own religious obligations,” added Dhammaratana.

The pro-opposition Free Malaysia Today tried to get Dhammarstana to say something more which I suspect is to find excuse for the Buddhists involved in the incident, but he refused to do so.

The honorable Buddhist chief priest is unlike those usual others who represent the Pakatan infiltrated Malaysian Consultative Council of Buddhism, Christianity,Hinduism, Sikhism and Taoism (MCCBCHST).

And these were excerpts of what Dhammaratana said to FMT,


“I try my best to encourage Buddhists to not have this kind of incident in the future,”


“We have to understand as we are living in Malaysia, you have to use a little bit of common sense.
“We should not make other people unhappy, we should try our best to make everyone happy."
“All Buddhists must at all time be conscious and aware of the fundamental principle expounded by Lord Buddha: ‘It is impossible to build one’s own happiness on the unhappiness of others’.”


I think that was a sincere enough apology. I also believe that the incident was caused more by ignorance rather than a malicious attempt to insult Muslims and their religion.


So, as far as I am concerned, I accepted the apology by the honorable
Buddhist chief high priest K Sri Dhammaratana Nayake Maha Thera and would like to put on record here that I bear no grudges against Buddhists including those involved in the incident.
Posted by Annie at 22:54