Apparently, all those mufti and alim ulama may soon lose their job.

At least, that's how it should be according to this article in the MCA-own the Star newspaper,


Only in Malaysia: where we have gone wrong with fatwa

It's written by Zainah Anwar, the founder of Sisters in Islam. 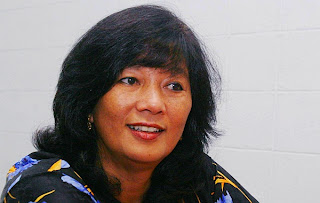 She presented all sorts of arguments which I believe pointed to the effect that people like her have the same rights as the mufti and those sitting at the fatwa council to decide on how the sharia is to be governed.

However, I noted this little paragraph which I think was where her aim is really laid at,

"How much more does it take for this government to realise that forcing people to believe what they do not believe does not constitute faith?"

Zainah knows that she can't win if she goes against the ulama and mufti head on because the muslims of this country will not go along with her in such a fight.

So, the other way of going about it is to attack the government, which is apparently the best target if anyone want to get at such institutions such as the fatwa council.

Topple the BN government and Zainah and the gang may change the way it works in that council. Well, who knows, maybe Zainah herself may sit at the council after that.

However, the way it is now, most muslims of this country would rather follow those with the best religious knowledge rather than some liberal women who claim to know their religion but not even bother to wear a tudung.

But, there is a likelihood that such brain washings via articles such as the one wrote by Zainah and published by the Star, may change things in future.

As it was, not too long ago, who would had thought that young Malay Muslim children wearing kopiah would be told by their parents to carry the flag of DAP, which leaders had made it clear that they do not want this country to be govern as according to Islam. It is happening now, thanks to such manipulation of mind carried out relentlessly by DAP and its allies.

Well, I'm not a devout Muslim myself and like Zainah, I don't wear tudung and such.

But I will not argue against those fatwa either or at least I wouldn't say that I am better when it comes to knowledge of Islamic teachings than those alim ulama. I may not be able to abide by all the fatwa or even the basic teachings of Islam, but I will not try to run it down either. Ok, I may make some noises, but not to the extent of describing the alim ulama as dictators and such.

This whole thing reminds me of an incident related to me a few years ago.

A group of liberal Muslim women had tried to meet with a mufti and debate with him on an issue of Islamic jurisprudence.

The mufti just asked a question, "Have you all performed the solat (the five times daily obligatory prayers for Muslims) before coming here to debate with me?"

The debate did not take place.
Posted by Annie at 06:36