Mukhriz and Khairy should contest for VP

I got this bit of time before the Raya kenduri at my family home starts an hour from now. I would therefore like to use the time to put in this blog a little idea which crossed my mind before I fell asleep last night.

I would like to suggest for Kedah MB DS Mukhriz Mahathir to contest for the Umno vice-presidency in the coming party polls.

I know it may sound quite too ambitious but then again I don't see any harm in him trying.

After all, Umno badly needs a capable young leader at the upper level of its leadership.

For the record, Mukhriz had proven himself capable of handling the most arduous tasks by leading BN and Umno to the most significant achievement in GE13 which was the recapture of Kedah.

And while I'm at it, I think Umno Youth chief Khairy Jamaluddin should also have a go at one of the VP posts as well. He should try to move out of his comfort zone in Umno Youth and let the party wing have an even younger leader at its helm.

This is a long shot but for me, if Khairy can actually team up with Mukhriz in the VP contest, I think I could buy the suggestion that he really has nothing to do with his father-in-law's latest moves against Mukhriz's dad and that he had really turned a new leaf. 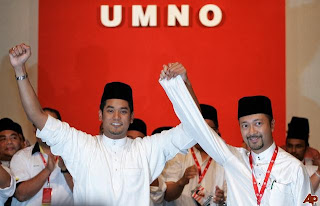 I think that the whole thing about Pak Lah attacking Tun M in his book could then actually just be turned into a silly joke and Pakatan could not make much out of it.

I think Umno could benefit with having the two relatively young guys as its vice presidents. One, cool and composed, the other, cunning and forceful.

Of course, that's provided both are sincere with each other in their partnership to uphold the struggle for agama, bangsa dan negara.
Posted by Annie at 10:19