In support of Yelena

There are two types of people who seem to be above criticism in this world - the Jews and those who are sexually abnormal.

Those who criticize these people will be vilified and condemned in the world media.

Of course the world media is mostly controlled by Jews and to a large extent liberals who do not mind sexual abnormality.

The Jews are virtually untouchable. Anything negative said about them will invite the strongest reaction.

Tun Dr Mahathir Mohamad was branded a racist for stating the fact that "the Jews rule the world by proxy".

The Passion of the Christ

which depicted the Jews in a bad light.

Those who are sexually abnormal seem to be equally untouchable these days.

I'm talking about the LGBT (lesbians, gays, bisexuals and trans-genders).

You simply should not say anything against them.

This applies even if a question was put forth to you on what you think of the LGBT.

An honest opinion which does not favor the LGBT will be turned in such a way that the person who opined it will be seen as a monstrous intolerant person. 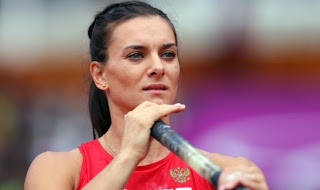 You can read what happened to her here,

If you watch the video of the press conference which goes with the report, you would noticed that Yelena was responding to a question from members of the press.

What I suspected was that the journalist who asked the question was trying to get her to disapprove with the new Russian laws which ban gay parades or any public display of support for abnormal sexual behavior.

Yelena had instead expressed her support for the laws of her country and described it as disrespectful for others to display anything that encourages people to break those laws.

Now, Yelena has been branded as "so behind the times" and other such negative labels.

Back here in Malaysia, the momentum is building for the recognition of the LGBT rights as championed by most of the Pakatan leaders. Events such as

were supported by them.

Anything for the votes to power.

Those who goes against them are branded  "so behind times" too.

Personally, I don't care what people want to do with each other behind closed door.

In fact, some of my good friends are gays.

But I just hate it when people shove their opinion right in my face and force me to accept what I had been taught as wrong since I was a child to be a normal thing that people must get used to.
Posted by Annie at 08:02