This is the theme of PM DS Najib Razak's Hari Raya message,


Well, that's all fine and nice.

I have always been especially supportive of Datuk Najib's effort to improve race relations in this country.

"So, on special occasions like these, for the sake of our beloved country, foster and continue to sow the seeds of unity among us," said the PM.


Okay lah Datuk Najib, I will try. It's going to be difficult but I will really try. 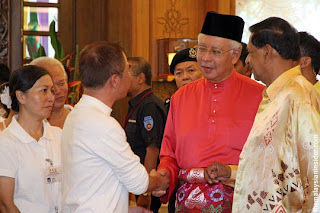 Hopefully though, the non-Muslims, especially Chinese of this country could care to realize how Datuk Najib is still trying to urge his fellow Malay muslims to open their heart in friendship to them even after what they did to him in GE13.

After the Chinese tsunami of GE13, I thought of abandoning this whole business of being a moderate. It was not easy as I have always been a moderate all my life.

It's also very hard to behave like an ultra Malay when you are a half Chinese.

But then sometimes the behavior of some Chinese individuals who so cockily made it known to me that the Chinese of this country could do well without the Malays strengthened my resolve. Their economic power and growing political clout under the DAP had apparently made them extremely arrogant.

The thought of most Chinese sharing the same chauvinistic  sentiments as those who think that the Malays are inferior to them riled me up all over again.

Then there are all those self-hating Malay liberals running down their own race, convincing me that the Malays need to take the more united hardline stance if they want to survive as a bangsa yang bermaruah.

Yet still, whenever I spend time with my Chinese mother, my heart went soft. And then there are the good Chinese that I know who hold no grudges against the Malays.

On this Hari Raya day, I hope there are enough among the Chinese who read Datuk Najib's message and realize that the Malay leadership and most of the community sincerely want to be their friends and bear no malice of wanting to treat them as second class citizens or oppress them in any way.

I hope they will reject those who try to convince them otherwise.

Only then, I think things could improve and we Malaysians of all races could once again view each other without distrust.
Posted by Annie at 12:08