Last night I watched a documentary which reminds me of the all out "meritocracy" as demanded by the DAP.

It's about the big eating the small kind of thing and survival of the fittest as the justification. If you are not strong, then you have to stay at the lower end of the food chain or perished.

Here is a link to the subject matter of the documentary,

And this is a bit from the documentary,

Ok, it may be a bit extreme, but that's how meritocracy is in the animal world. If you are the bigger or stronger animal, then you have the right to devour the smaller and weaker animal.

The same logic applies in the human's meritocracy concept. It doesn't matter whether you are a poor kampung boy or a middle class urban girl, as they will be judged the same when competing for the opportunity to get ahead in life. The advantages on the side of the middle class urban girl and her connections doesn't count. Any assistance given to the kampung boy to level the playing field will be condemned as giving him a "tongkat" (crutch).

That's why, when BN won the votes of the rural poor, the Pakatan gang mocked their rival as being supported by the poor, backward and uninformed.

So, Malays and the rest of the bumiputera, in case the DAP takes over, you all better make sure you become the bigger sharks. 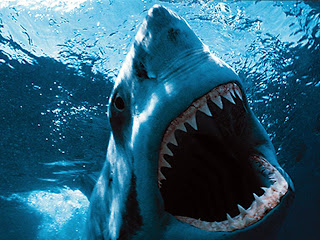