Chipping away at Islam

The new Malay Mail online team, led by ex-Malaysian Insider's Leslie Lau and his sister Joan seem to be busy during this Hari Raya celebrations with stories which could put a bit of a damper on the Muslims' celebrations.

These two stories released today appeared to me as trying to put pressure on PM DS Najib Razak over the Allah and position of Islam issues,

The second story even quoted former PM Tun Abdullah Ahmad Badawi on something which looks sinister to me,

“People do not really understand what interfaith dialogue is, especially the muftis,” Abdullah, popularly called Pak Lah, said in an interview in the book “Awakenings: The Abdullah Badawi Years in Malaysia”.

Pak Lah, were you saying that the muftis are all so stupid that they do not know what the interfaith dialogue is all about? Does your daughter Nori, who is if I'm not mistaken is a member of Sisters in Islam got anything to do with what you said?

Well, Datuk Najib need to stand firm on this matter. He need to bear in mind that no matter how hard he tried to appease these elements who tried to pressure him on the religious issue, he will never get their support at the end of the day. Not as if he had never tried. He actually tried and got burned doing so previously. 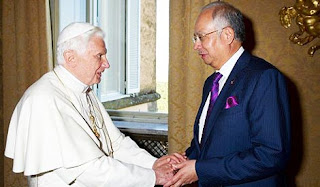 Datuk Najib must remember the outcome of GE13, whenever he feels that his resolve against these elements seems to weaken.

I pray that he will not succumb to these elements who clearly will push their way bit by bit, using all means necessary until Islam is no longer the official religion of this country.
Posted by Annie at 00:24