KJ should take better care of his father-in-law

Former PM Tun Abdullah Ahmad Badawi has denied he is teaming up with the Pakatan gang in the publication of the book "Awakening: The Abdullah Badawi Years in Malaysia".

You can read the Bernama's report here,

Abdullah dismisses assumptions he conspired with opposition over book

Well, if Pak Lah is not in cahoot with the Pakatan gang in this matter, then he is definitely being used by them to further their agenda.

I wonder, does he knows who are James Chin and Bridget Welsh really are when they requested for that interview for the book and when he answered their questions?

Did Pak Lah knows that his words were to be used in a book which in all probability be used by Pakatan to specifically attack Tun Dr Mahathir Mohamad and the Barisan Nasional administration?

I also wonder what advice was given to him by all those smart advisors of his about the consequences of entertaining the questions of the "academicians" who are well known for their sympathy of the Pakatan gang?

Khairy Jamaluddin should know the answers to these questions. 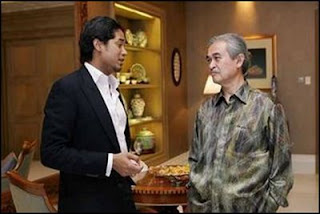 The Umno Youth chief should know how to better protect his father-in-law from being manipulated (if Pak Lah's denial was true) by the Pakatan people.

Now that the Umno election is just around the corner, the issue surrounding the book will hang like a dark cloud over KJ's head as he tries to defend his post.

It would be a pity if KJ, who appeared to be making all the right moves of late fails to clear this hurdle as Umno now needs all the capable young leaders in its rank.
Posted by Annie at 00:22