Whatever police do, they will always be villains to some

As you all probably know by now, police are currently cracking down hard on the criminals following a spike of violent crimes including almost daily execution style killings of late.

Here is a report on that crackdown by the not so Malaysian government-friendly AFP,
Malaysian police kill 5, detain 200 in crime crackdown

The killing of five members of the notorious 04 Gang in a shootout in Penang earlier today had nonetheless resulted with this report by the Star newspaper which had of late been running a series of crime stories on its front page,

"What is the reason that they have to start shooting when they can just fire a warning shot?" asked a family member of one of those killed in the incident, according to the report.

Probably because the five guys shot dead were armed with guns and they were known for being behind a spate of killings in several states. 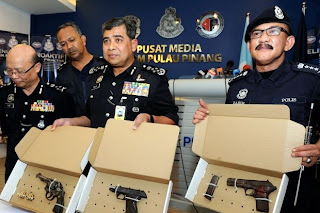 I'm just glad that none of the policemen involved in the operation were injured or worse.

Do note that "assisting" the families of the gunned down gang members was DAP's Seri Delima assemblyman R.S.N Rayer,

Meanwhile, here is another crime-related report by the Star,

Here are the excerpts of the report,

- It was reported that Foo's 22-year-old wife Pua Bee Chun was killed after police shot at a car driven by a man, believed to be her boyfriend, who was a crime suspect.

- In the Jan 18 incident, police fired at the car after the driver allegedly tried to ram into policemen following a 10km car chase.

- The man, who was unhurt, then surrendered and police discovered Pua at the front passenger seat with a gunshot wound.

Okay, first of all, what was the deceased Madam Pua, a 22-year-old mother of two children doing in a car driven by a man, believed to be her boyfriend, who is a suspected criminal?

The car, driven by the suspected criminal had tried to ram into policemen. What do we expect the policemen to do? Do nothing?

Do bear in mind that police had to chase the suspected criminal for about 10 kilometer before they shot at it.

The suspected criminal finally gave up, probably after realizing that his girlfriend, who was a wife of someone else, had been fatally wounded.

Then of course came the hero of the down trodden and defender of victims of the cruel an unjust police. Here he is, writing his wise words in a rabidly pro-Pakatan website,

RIDICULOUS of cops to force victims to sue govt: AG must intervene - Gobind

Here is an excerpt of what DAP's Puchong MP Gobind has to say,

"I call upon the Attorney-General to intervene and direct the police to provide Foo with the details he has sought. The Attorney-General should not make this a precedent, where individuals who have complaints against the police need to file actions in court for basic information.
"That would be oppressive and place the rakyat at a severe disadvantage in that they would have to go through the expensive and tedious process of litigation just to get the most basic of information.
"No wonder the people think so poorly of the police."

Well, I really don't fancy being a policeman. Their job is so damn difficult, especially for having to suffer from all these nonsense.
Posted by Annie at 23:49