A new frontline opening up on Hari Raya

Just when I thought I can rest for a bit on this Raya night, the political frontline seems to be heating up again.

This time the threat is not a frontal assault by the Pakatan of DAP, PKR and Pas.

After all, they no longer have such capability. DAP's Chinese chauvinism trump card had been totally exposed, PKR reduced to pathetic sour grapes after their failed Blackout 505 and Pas totally depleted of support from the Malay middle ground.

The threat this time comes from the Pak Lah's gang who dominated Umno and the government right after the retirement of Tun Dr Mahathir Mohamad. in the early 2000s till 2008.

The players are the same. 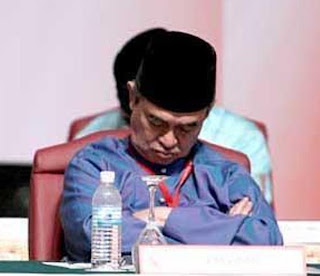 and A Voice's even more detailed

I had my differences with these two senior bloggers in the past but for this one, I have to say that I'm backing them all the way.

I will never forget those dark years of 2004-2008 and no matter how much spinning done, I could not so easily forgive Pak Lah and his people for the damage they inflicted on the country at that time.

It's true that I had of late been warming up to the idea of supporting Khairy Jamaluddin as the young new hope of Umno after he showed signs of turning a new leaf, but these latest moves by people who are his friends and close associates forced me to abort that idea.

It's too bad for KJ.

I admit that I don't have the hard facts on why the attack by the Pak Lah's camp comes only now and not previously over the past five years, but I would like to theorize that it was most likely due to the failure of Pakatan's effort to topple the Barisan Nasional government in GE13.

The attack which was centered at Dr Mahathir could most likely designed as a trigger point for a renewed assault by Pakatan in their early preparations for the next general election.

As pointed out by BigDog and A Voice, those who pulled the strings of this Pak Lah's project to demonize Dr Mahathir and indirectly the current BN government were clearly Pakatan supporters.

And as it was, most of Pak Lah's people are known to be not Umno friendly individuals after all. Some had come out of their closet to directly or indirectly attacked the BN government after DS Najib Razak took over the premiership in 2008.

Now, that this new front is opening up for Datuk Najib to defend, I hope he will clean up remnants of Pak Lah's minions still embedded in his camp. He got no choice but to be firm on this as it has now become clear which side these people actually belong.

As for the Umno people who will vote in their leaders in the coming party elections just weeks from now, they must reject these traitors, failing which it will mark the beginning of the end for their party.
Posted by Annie at 23:57