On the eve of Merdeka Day yesterday, DS Anwar Ibrahim tried to get the attention of everyone by using the occasion to showcase, as usual - himself.

Ever since the failure of his Blackout 505 which was to protest the validity of Barisan Nasional's win in GE13, it was becoming very obvious that Anwar is slowly but surely slipping into obscurity. 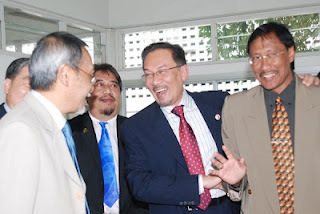 It was after all, not him who stopped BN from regaining it's two third majority in GE13.

The real hero of Pakatan now is DAP, backed by the united Chinese electorates.

Anwar is now reduced to be just the Malay figurehead of Pakatan. His PKR has 30 parliament seats as compared to DAP's 38. And most of the PKR's seats were actually won courtesy of DAP's Chinese supporters.

That was why Anwar made that offer of reconciliation to BN, by projecting an image of himself being magnanimous on Merdeka eve.

I'm putting here the report by Reuters on Anwar's offer to BN and interspersed it with my comments,

Malaysia's opposition says it's willing to help tackle a range of problems in the country, showing signs of softening its stand towards the government for the first time since a disputed May election.
The opposition, led by former finance minister Anwar Ibrahim, has refused to accept the election victory of the ruling coalition, which extended its 56-year rule but saw its parliamentary majority reduced.
In an Independence Day message, Anwar said the opposition maintains its "strong protests about the validity" of the vote, but, for the first time, he indicated willingness to heal divisions the election brought.
Me : If you want to maintain your "strong protest about the validity" of the vote, then you shouldn't even recognize the BN government, let alone express your willingness to cooperate with such an unlawfully elected government.
"We are prepared to put aside our differences for the sake of the nation's wellbeing and future," Mr Anwar said.
Me: Yea, rite. As if we don't know his real motive. It should read...We are prepared to put aside our differences for the sake of MY WELLBEING AND FUTURE.
Prime Minister Najib Razak's coalition lost the popular vote in the election although it won the most seats.
Mr Anwar listed problems facing the country including flagging public finances, slowing economic growth, surging rates of crime and corruption.
Me: Anwar got no business talking about how to handle these problems. When given the chance in late 1990s, the former deputy prime minister and finance minister failed miserably. Those who disagree should tell me what Anwar had contributed to the country during his tenure in the government.
He also referred to an increasing number of media reports on "race baiting".
Me: Only now that he wanted to talk about "race baiting"? Why not when his ally DAP was going full swing galvanizing the Chinese support by telling the community that they were being treated as second class citizens by the "racist Umno government" despite being the most prosperous ethnic group in the country?
"Not only is there a lack of leadership in ameliorating the situation but it appears that the government is encouraging this phenomenon to worsen," Mr Anwar said.
Me: Yes, and as usual, the lack of leadership should be filled up by your leadership, isn't it Anwar? DS Najib Razak's leadership is no good for him....well, anyone's leadership is no good to him for that matter. Big ego at play, that one.
Relations between majority ethnic Malays and ethnic Chinese and ethnic Indian minorities are a sensitive issue.
While ethnic Malays tend to support the ruling coalition, many members of the economically important ethnic Chinese minority rallied to the opposition in the last polls.
Me: What the Reuter's report was trying to convey was that the "economically important" has now also become "politically important". Let's see how important could that be should the Malays somehow managed to unite in the next general election.
"We believe that it is imperative for the prime minister to convene without the slightest delay a round-table meeting between the ... government and Pakatan Rakyat in order to deliberate on the issues raised and formulate a comprehensive solution," Mr Anwar said, referring to the alliance he heads.
Me: Well Anwar, who are you to tell Datuk Najib what to do. Why should he seek your counsel to run his government? If you had won in GE13, would you and your allies, in particular the DAP would want to have a round or square table meeting with Datuk Najib? I don't think so.
Government spokesmen were not available for comment.
Me: And rightly so. Why should they be bothered, ok?
Reuters
Posted by Annie at 06:00