The dynamic duo of Felda Global Venture (FGV) are in the news today. 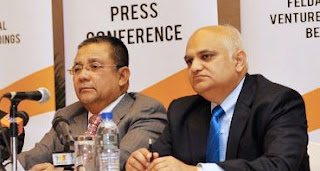 Here is the one on the chairman,


Isa Samad Yet To Decide About Joining The Fray

(Note the last paragraph - Yesterday, various news portals and blogs had reported that Isa, who is also the Member of Parliament for Jempol was interested in going for one of the three vice-president posts at the polls.)

If someone like Isa is really going to contest for the Umno vice-president post, then I guess it will really heat up things.

Considering Isa' past track record in contesting Umno VP post and him being in charge of Felda where he should have considerable "influence and resources", I think his probable challenge should not be taken lightly by the incumbents.

Will the other VPs challenge those higher up than them to escape the heat?

If that happened, then all those talks about keeping the number one and two posts unchallenged would be going out of the window.

Next is the new CEO and president, here is the story,

Very fine and dandy indeed as the story was featured on the front page of the NST's  Business Times section.

It made the bald fella seems very distinguished and capable of taking FGV to a much more wonderful level.

The only glitch is that, in that story there was no DR in front of the bald fella's name.

Dropping the doctorate title from a person's name like that is a very serious offense to some people, as I had learned not too long ago...ehem...ehem....

I wonder if NST had made a mistake or purposely did that....and if the newspaper is going to be sued by someone for such an insulting omission....hmmmmm.....
Posted by Annie at 17:54