Breakfast with my mother

I'm getting tired of writing about serious stuff. I have been at it almost non-stop the past few weeks.

Furthermore, words are out that PM DS Najib Razak may want to listen to his advisers and not care anymore about what bloggers like myself wrote.

So, from now on, I think I will try to have more fun instead in my writings.

Let the cybertroopers hired by the PM's advisers do the hard work of battling the Pakatan gang. Well, maybe it is for the better. After all, the cybertroopers may be smarter than independent bloggers like myself as they are well paid professionals and should be of better credibility as compared to someone like me who is just an amateur hack.

Anyway, since today is Saturday and I got an off day, I'm going to just write a fluff posting to suit my relaxed mood today. Just something about myself and my mother.

Earlier this morning, my mother asked me out for breakfast. I was quite excited as it has been quite awhile since we had breakfast together. That was until she told me that she felt like having the McD Big Breakfast. 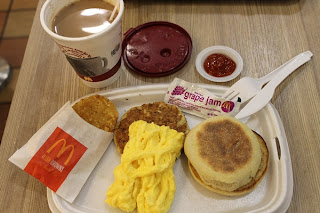 As if there were nothing or no where else for breakfast....I quietly told myself. My mother can be quite funny in her choices of food. But okay lah, it was better than nothing, as I did miss my mother and just want to spend some time with her. We ended up at the McD of Citta Mall in Subang.

It turned out that my mother had also stopped reading my blog. She said I'm sounding very anti-Chinese in my writings these days and that she can't bear to read some of the stuff that I wrote. I just kept quiet when she told me that. Well, what can I say, I always write as according to how I feel inside my heart.

My mother also said that it was not true when I wrote about her being a staunch DAP supporter. She said she simply supports what she feels is right and that she has never followed the others blindly.

"I do realize that there were some of my friends who had gone crazy lately because of politics," she said.

"There are those who previously never care about anything but themselves now talking about saving the country just because they were swept along by the euphoria. I even got friends who accused me of being a traitor just because I refused to be as fanatical as them.

My mother went on and on like that for almost half an hour. She was her usual upset self whenever she thinks that I'm being a not so good daughter. She just channels her anger elsewhere.

After she had calmed down, I asked, "Ma, do you still support DAP or not?"

Her still angry reply was - "I only support you, your father and myself. Why do I want to support DAP ka, MCA ka, Umno ka? What? You think those people really care about us?"

I think that in her anger, she forgot to mention her support for her parents, siblings and the rest of the family in Singapore.

Well, whenever my mother is in her foul mood, I rather not stretch my luck. After that I just ate my not so tasty McD Big Breakfast quietly.

Before we parted, my mother surprised me when she hugged me tightly. She hardly did that. My mother is not the publicly affectionate type of person. Maybe she missed me too and was sorry that she got upset earlier.

Ma, I know you are not reading this but I want to put on record here that I'm sorry for making you angry with my assumptions about yourself. I love you Ma.
Posted by Annie at 18:32