PKR and Pas are more powerful than DAP

This is the weekly posting by Ai, formerly of BigCat -

When I was writing for the BIGCAT blog, I had consistently insisted that DAP is the most powerful party in Pakatan as compared to PKR and Pas.

Now I have to admit that I'm not sure anymore about my assessment.

PKR and Pas have apparently proven that they are more powerful than DAP and these had been proven by their leaders.

Of course, almost everyone know by now that PKR's most powerful man is this guy-

Now, it's Pas' turn to prove that its leaders are powerful too and chosen to prove their self proclaimed Islamic party's powerfulness is this guy -

Well, come to think of it, DAP leaders are actually much less powerful than those of their partners. For instance, this guy had just about to try to be powerful and he ended up being hit with a flying ashtray causing the plaster on his forehead - 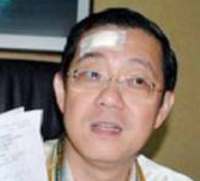 Hmmm...maybe it's true what they said about Malays being more powerful than Chinese....even among those in Pakatan.
Posted by Annie at 02:34