Najib must not allow "powerful outsiders" to dictate his choice

So, my friend and NST were right.

The parliament had been dissolved at 11.30am.

I guess, everyone will be writing about that today.

So, I think I better write about something else.

The latest that I was informed, some of the States were having some complications.

My sources indicated, that there have been attempts by "powerful outsiders" to pressure Najib to appoint his commanders according to their wishes.

This is something Najib could have done without.

These "powerful outsiders" who were solely driven by greed and self interest want their choice as BN's field commanders as they feel that once the coalition won the election, then their men will be in charge of the respective States, thus it will make it easier for them to gain access to things that they wanted.

These "powerful outsiders" know they need BN to win, but despite that, they do not care about how the coalition have to do it. They even want field commanders who have been working hard on the ground for the past five years be dropped and replaced by their own "yes men". All sorts of excuses were given to achieve their objectives. When such excuses don't work, they resorted to threats.

My fervent wish is for Najib to stand his ground and not give in to these "powerful outsiders". If he allowed them to have their way, it will set a precedent that will be harmful for not only BN but also the country as a whole in the long run. 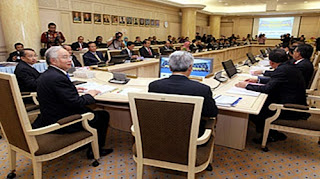 Najib needs to ensure that the choice of the country's and states' leadership be dictated  solely by the mandate given by the rakyat and not by some powerful people who only genuinely care about their own tembolok (stomach).
Posted by Annie at 13:33