Took a walk at the nearby town with two guys who befriended me at the hotel we are staying.

One of them is a rich Singaporean in his mid-40s, and the other an artist in his late 20s based in KL.

I suspect that they are lovers.

Well, I don't mind gays as long as they don't do their gay stuff in front of me.

A man kissing another man is gross, okay. 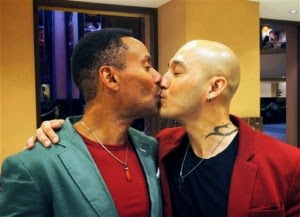 I don't even want to imagine beyond that.

Lesbian stuff however is not so bad.

Well, I don't mind it that much if two women start kissing in front of me.

It's weird but not as gross as two men kissing each other.

In fact, when I was young I did try it once with my best friend to know how it feels.

I know it's haram and all but I was really young and curious at that time.

It's not so bad actually, but at the same time it didn't make me want to be a lesbian.

My best friend also didn't turn into a lesbian.

Anyway, the night walk was nice.

It was quite cold. Something like early spring in UK.

The two guys had wanted to try the charcoal steamboat which is very popular among those who visit the town.

I'm not sure if it is halal, so I just ordered for my drink, telling the duo that I'm on diet.

We spoke mostly in Mandarin as the Singaporean guy insisted that he wanted to practice the language.

It was good company.

Well, when I got back to my room, I weighted myself.

The room got a good weighing machine.

Despite not taking dinner for most of the past week, I'm still at 52.64 kg.

Need to think of a new strategy if I want to be cute again.

If I continue to be like this, I'm afraid I will end up like DS Rosmah Mansur.

I mean, it's a fact that the lady could do with a better diet.

That is the reality.

Ignoring reality will only harm oneself.

I wish others accept the reality about themselves, and in the process saving precious time and energy we otherwise spend on trying to process their bullshit.

Examples of what could possibly be ground breaking admission of reality:

Anwar : Yes, I am an irritating bisexual liar.

Najib : Okay, Rosmah can be quite scary sometimes.

Guan Eng: True, I was in love with Rainbow but scared of Betty. And I miss seeing Regina at my PCs....

Kit Siang: Zairil is a fucker.

Dyana: I dig Chinese guys or guys who look Chinese. It's the K-Pop thing.

Malays: We fucked up for being too nice, too lazy, too indisciplined.

Chinese: Our forefathers were indeed immigrants (pendatang) who were welcomed into this country by the Malays and other bumiputera.

See, much easier it is going to be from here onwards.