Guan Eng pulls a knife, you pull a gun, okay.

Another quiet morning at this quiet place....

I don't feel like doing much today. Just want to lie down a lot and read my books.

Yesterday I went for a long walk and was tired.

Vowed to myself when I woke up just now not to read the news or pick-up calls from my politician friends.

They can survive without me and continue to make fools of themselves. I don't really care.

PM Najib Razak, for instance, doesn't need an obscure anonymous blogger to tell him how to fight that Chinese bully Lim Guan Eng and his friends.

He has many highly paid consultants and advisers to tell him what to do.

And they all got Phds, and other credentials from all those fancy UK and US universities.

However, let me put on record here that I disagree with many of their advises to the PM, such as for Najib to remain passive when attacked by the opposition.

It makes the PM looks so weak that he can't seem to deal with a geeky Chinese bully like Guan Eng and his gang. 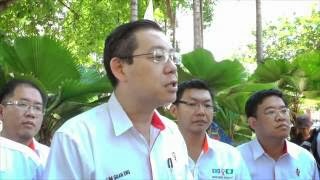 Such advises even sound gay to me.

To me, Najib need to project a stronger and more decisive image.

He needs to send a message to the likes of Guan Eng that they can't mess with him.

Time for being nice is over, Mr PM.

You can't appear to be weak or gay, as advised by your advisers, because if you appear like that, Guan Eng and gang will run all over you in no time at all. It's the nature of bullies. They prey on the weak.

With bullies, you need to whack them in the face until their nose bleed.

For this advise, let me quote the character Jim Malone from the gangster movie The Untouchables,

"Here's how you get him. He pulls a knife, you pull a gun. He sends one of yours to the hospital, you send one of his to the morgue!"

Well, that doesn't sounds weak or gay at all, isn't it?

But then again, I'm just an insignificant anonymous blogger.

Why the hell would the PM wants to listen to me.

So, I better just relax and simply watch the world goes by from this place on top of a hill.