As I was writing my previous posting When a smart powerful Chinese met a smart Melayu oldman, which was about the meeting between Chinese president Xi Jinping and former prime minister Tun Dr Mahathir Mohamad, it actually brought back memories of my first trip to China.

It also reminded me that it was here that I actually first touched real snow, 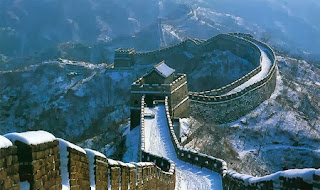 the Great Wall of China.

Believe it or not, I was a guest of the Chinese government on that trip.

I had insisted on the Chinese official, who was my guide on that trip to take me to see the Great Wall.

It was winter and the guy had laughed at me and said no one goes to visit the place at that time of the year.

"It's freezing up there. Not even the soldiers and barbarians will be there to give you a show," he quipped.

But I kept on bugging him until on the final day I was in Beijing, he took me to the Great Wall.

It was about an hour and a half drive from central Beijing when we arrived at the foot of the ridge where a cable car station was located.

We took the cable car ride all the way to the top of the ridge where the Great Wall stretches all the way till over the horizon.

It was damn cold and when the wind blows, I had to hide behind my very well built guide as the force of the wind could had almost knocked me over.

The snow on the ground was not yet too thick at that time.

I picked up some of it and that was the first time I held real snow in my hands.

The view from top of the wall was simply spectacular.

When I went home and told my mother that experience, she got very green with envy.

It was fun teasing her about it, as if I had suddenly became more Chinese than her.

You see, my mother had visited China many times on business but somehow had never been to Beijing and visit the Great Wall.

Another place where my mother wants to visit but I had beaten her to it is this place, 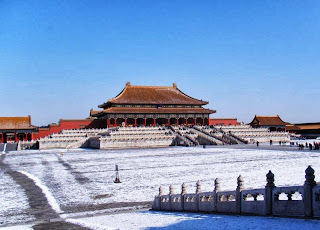 It was also on that trip that I first saw president Xi Jinping in person. He was not yet the Chinese president at that time.

And this you may not believe too, but it's really true, the first time I saw Xi was as he was standing about 100 meters from me inside this building, 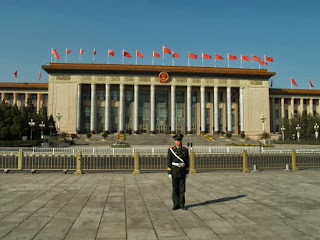 the Great Hall of the People.

It is sorts of the parliament building of China.

Yes, my mother had never been inside that building too, let alone be in the presence of the Chinese president :-)

I do wonder if the late former Communist Party of Malaya chairman Chin Peng had ever been in that building.

One more thing, I did run around on the ground of Tiananmen Square in front of the hall. My mother didn't like it a bit when she saw the photos of me monkeying around at that square as it was on that ground that Chinese soldiers had killed hundreds of students protesting against the leadership of the Communist Party of China in 1989. My father told me that my mother had shed tears for the victims of that massacre.

Well, that is about all to it.

Yes, tonight I'm just putting it on record that I had actually been to China and therefore should qualify to write a bit about that country. Not too much, but just a bit, ok.
Posted by Annie at 00:48