I have been resting the whole day.

Surfed the net, watched the TV....lepaking. Did a posting earlier in the day out of boredom.

Now watching Aladdin at Disney channel while writing this.

Saw this one by Helen just now,

Gerakan bashing Perkasa but says nothing about DAP

and checked with a journalist friend who covered the Gerakan elections today.

My friend said it's true. The Gerakan delegates in their speeches whacked not just Perkasa but also Umno.

This happened after Umno president Najib Razak left the PGRM towers after officiating the launching of the party's annual general meeting. 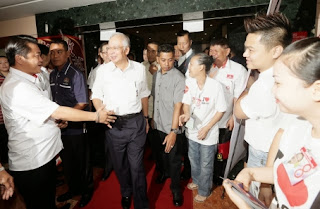 The Gerakan people blamed their party's current shitty state of affairs on Umno.

Not DAP but Umno, which president just officiated their meeting.

Not on their traitorous members who voted for Pakatan for racial reasons, but they blame it on all those Melayu Umno.

Yes Gerakan, say it with a straight face if most of you all didn't betray your BN allies during the GE13.

What kind of friends they are? Welcoming Najib to their meeting and than spat on him as soon as the man turned around to leave.

Very much a repeat of what the Chinese community did to Najib and other moderate Umno leaders in GE13.

In GE13, Gerakan was left with one parliamentary seat in Simpang Renggam and three state seats. How did they win these seats? Through their own efforts?

My friend said several of the Gerakan speakers even called for the party to get out of BN so that they could have that anti-Umno aura which works so well with DAP.

They feel that being associated with Umno has damaged their party and it's now time for them to get out.

All those years when they ruled Penang while in BN doesn't count, I guess.

These Gerakan people want their party to go on their own and contest the mixed seats in GE14 where they hope to win more seats and thus better bargaining power to negotiate either with Pakatan or BN for a place in the next government.

Well, I hope they do get out of BN. I would love to see how they will fare after that.

Okay la, let's say BN lose GE14, and Gerakan win some seats, I would love to see them negotiate their place in Pakatan with DAP.

Let's see how generous DAP could be.

Really, I pray that the new Gerakan president....eerrr, can't remember his name and don't find it worthwhile to check....be blessed with the wisdom to take Gerakan out of BN.

You don't need enemies with a friend like that.
Posted by Annie at 22:12