Tropical island is better than Umno or DAP

Eh, I think enough lah me writing about Umno.

It's no fun at all writing about that status quo party.

In fact, it's no fun writing about any other political parties too for now.

The Pakatan opposition, led by DAP was even worse.
DAP : Chinese party with communist dictatorship-style election.
PKR : Shameless Melayu party riding piggy back on DAP's Chinese support.
Pas : Confused Melayu party, willing to sell its soul for a bit of power under the DAP's armpits.

At least Umno, which led BN got proper democratic election.

Okay, the outcome sucks, but at least it's quite democratic and people like me can bitch about its results.

If I'm with DAP, surely they would had sacked me if I complain about the party's election the way I did with Umno.

Well, if I'm not a DAP member, as it was that I am not an Umno member, they would definitely have branded me an Umno's lap dog or running dog or whatever other dog if I complain about DAP's election.

In DAP, everyone must kiss the butt of Kit Siang and Guan Eng, plain and simple....and they must also say that it smells so very fragrant.

With Najib and the gang, we can kick their butt from time to time if we feel that they had screwed up. And we can get away with it too.

Freedom of speech, okay. A lot of Umno members may be as stupid as donkeys but the party at least still believes in democracy, instead of being a despotic party pretending to be democratic like DAP.

Having said that, I really need to relax a bit and stop acting so melodramatic over everything just because now I know that most Umno members are quite thick up there in the skull.

They can't even differentiate between good and bad leaders, those who are really pejuang and those who are only interested in furthering their self interests.

Well, I'm not so smart either, spending my time and wasting my energy writing in support of their party.

As if they were appreciative of what I'm doing...my bet is they don't.

Can't blame them though, as mine is just an obscure anonymous blog, and nothing compared to all those famous pro-Umno blogs that they like to read so much such as Papagomo and Parpukari which have a gazillion page views each and legions of fans....so they said.

"Yours got no impact lah, so few people read your blog. So, don't get big headed, okay," said a Ghani Othman's aide to me just before the GE13.

So, DAP cybertroopers, stop harassing me because even the Umno people are saying that my blog is useless. So, no need to send all those trolls in here. Send them to the likes of Papagomo or Parpukari blogs instead.

Oh, btw, yesterday I got my plane tickets for my holiday next month. I'm flying off to a beautiful tropical island.

I'm so looking forward to it. Just want to relax by the beach and read a poetry book...that would be heavenly. 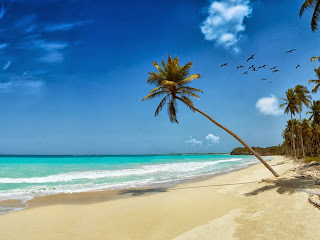 No more Umno or DAP or any other bullshit for now. Tiring la.
Posted by Annie at 07:58