The only way to correct the wrongs at FGV

Umno vice-presidential candidate Tan Sri Isa Samad and his people at Felda Global Venture are indeed sailing a choppy sea at the moment.

Several moves they made of late have come under the spot light. From dubious pricey purchases of assets to their shoddy treatment of former Group President and CEO of FGV  Tan Sri Sabri Ahmad (pic), who is now terminally ill. 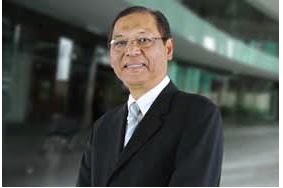 You can read the latest about the FGV saga at the following links,

Once again, Why Isa Samad must not ... (Part 3: Because of Section 122B of the Securities Industry Act )

But I believe Isa and his people will prevail despite the criticisms and potential legal sanction against them.

They are after all backed by powerful forces and have a huge war chest at their disposal.

I believe that they are among the untouchables.

I also believe they will be able to buy their way through the shit.

I noticed that FGV have been getting a lot of coverage in the mainstream media where the man of dubious credentials who was hoisted to replace Tan Sri Sabri Ahmad was given special treatment by the newspapers of late.

I wonder what were the deals between FGV and the newspapers.

Today, The StarBiz ran a full page interview with him, which was devoted on the defense by FGV against the latest criticisms directed at it. You can read it at this link,

However, I suspect the Star journalist assigned to interview the guy, Yvonne Tan knows that it's going to be just another PR stunt by FGV and she seems not very happy about it.

The way the article was structured made me think such.

Some of the criticisms against FGV and the guy in charge were highlighted right after the opening of the article.

These were slotted in as early as in the third paragraph,

Emir’s Phd in Government Reforms from Warnborough University, United Kingdom in 2008 came under the spotlight recently after some online sources said it was not from an accredited university in Malaysia. FGV has since defended his appointment and said that he was elected as the board was satisfied with his capabilities and experience to lead the FGV group.
Felda which owns 37% in FGV was also recently cast in negative light for its RM496.3mil purchase of London service apartments made by its investment unit, Felda Investment Corp (FIC).
Felda chairman Tan Sri Mohd Isa Abdul Samad on Thursday told newsmen that the “offer was too good to refuse”.

Do note that Yvone also highlighted the rationale by FGV on those criticisms which nonetheless were totally unconvincing.

The rest of the interview were as they were, mere PR stuff, but the mood had been set by those opening paragraphs.

None of the points raised however touched on the FGV's rather cold blooded treatment of Tan Sri Sabri Ahmad.

For that, you should go to this link,

As I had said earlier, those who are fighting to correct the wrongs at FGV may be relentless in their attacks, but I don't see how they can win this battle on their own.

The only hope, I believe is if Isa, who should be responsible for the whole thing be defeated in the coming Umno polls and those who win are genuine leaders who will do the right things in correcting the wrongs such as what are happening in the FGV case.
Posted by Annie at 13:17