When a smart powerful Chinese met a smart Melayu oldman

The interesting part of his itineraries on his last day here was an hour meeting with former prime minister Tun Dr Mahathir Mohamad. 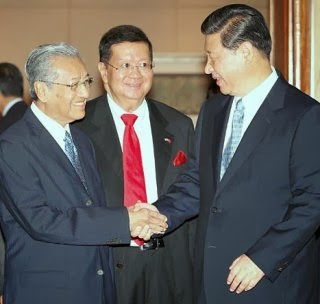 It's amazing that Xi, one of the most powerful person on this planet at the moment deemed it necessary to find time to have a talk with an old man who had retired a decade ago and even at the height of his career had only led a small developing country which many may consider as to be of little significance compared to China.

I guess Xi being a smart guy appreciates the thinking of Dr Mahathir and wanted to learn a trick or two from him. That despite a lot of ethnic Chinese here calling the old man a racist and an oppressive former leader who had turned them into second class citizens with the highest per capita income among ethnic groups in the country.

Here is the report by Bernama of that meeting between Xi and Dr Mahathir :

KUALA LUMPUR, Oct 5 (Bernama) -- Tun Dr Mahathir Mohamad has proposed that Malaysia and China set up a business and trade association to serve as platform to further boost the bilateral relationships of the two countries.
Making the proposal to China's President Xi Jinping during a meeting here today, the former prime minister proposed that the association be called the 'Cheng Ho Multi-cultural and Friendship Association'.
Speaking to reporters after the meeting at a hotel here, Dr Mahathir said the idea for the association was also to remember the Ming Dynasty seafarer Admiral Cheng Ho's contributions to the Malaysia-China relationship.
"He (Xi) is very supportive of that proposal," he said, adding that he hoped the association could be set up soon.
Xi ended his three-day state visit to Malaysia today.
Dr Mahathir noted that Xi had also voiced concern over the shipping congestion issue at the Straits of Melaka.
"We need to reduce the number of ships passing through the Straits by building a pipeline in the north to take the oil and other products across the Peninsular without having to go around the Peninsular.
"So, he (Xi) will consider this because he thinks this is a good idea and he will see what he can do to support it," he added.
Other issues discussed in the hour-long meeting included intensifying trade volume between both countries, said Dr Mahathir.
"We like to see more Chinese investments in Malaysia. At the moment, Malaysia's investment in China is more than Chinese investments in Malaysia," he added.
Dr Mahathir had also invited Xi to encourage more Chinese to invest in the Rubber City and the Automotive Components City, to be built at Kota Putra, situated at the Malaysia-Thai border.
So, Xi thinks Dr Mahathir's idea to build a pipeline across the north part of the Peninsular to reduce shipping congestion in the Straits of Malacca is good and will do what he can to make it a reality.

The idea is good for China as they need to transport oil coming from especially the Middle East to its rapidly developing regions as fast as they can. Currently tankers have to endure the traffic jam at the Straits of Malacca which is slowing down things for quite a bit.

As it is with the Chinese, once they had set their mind on something, they will do it.

The pipeline, if it becomes a reality, will then be running across from Perlis or Kedah to Kelantan or Terengganu. It will be an economic boon for those states.

Well, not bad coming from an 88-year-old guy many accused as being senile.
Posted by Annie at 09:07