The Merdeka Day celebrations are less than two weeks away yet I don't see much signs of it anywhere.

I think I can see more Pas flags hoisted up by private individuals than the Jalur Gemilang at their homes these days.

A neighbor of mine had a huge Pas flag set-up on top of a tree behind his house. He must have hired someone to put it there.

I also don't see people putting that small Malaysian flag on their car anymore. I remember that it was a popular practice several years ago.

Well, I'm not the extremely patriotic type either, but somehow this year, I sense that the "feels" of the Merdeka spirit was simply not there.

Maybe it's just me, but that's how I see it.

Or is it because I'm older now, that I find it harder to feel the celebratory mood? Something like not feeling overly joyous during Hari Raya as compared to when I was a kid.

The smart ministers also do not seem to have much idea of what to do to encourage a more patriotic mood...I think.

Here is a suggestion to enhance our patriotic spirit by our Communication and Multimedia Minister Datuk Seri Ahmad Shabery Cheek,

Sorry to say la Mr Smart Minister, I think the idea is so 1950s.

Just imagine playing the national anthem at a cinema before a kung fu movie about to be played. How many in the audience do you think will bother to stand up?

I think even those who want to stand up will be embarrassed to do so.

It's just so not cool.

Imagine if there are only two or three couples in the cinema, who are more interested to snuggle with each other rather than even watching the movie. Do you think they will be bothered to stand up?

Some may not even want to go watch movie in the cinemas just because of this. Better to just buy pirated DVD and watch at home leh. 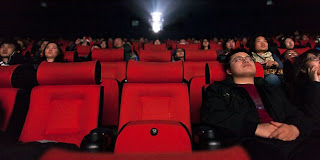 It is just not going to work la Mr Minister. In fact I think it will become just another joke or even an issue later on - patriotic people versus unpatriotic people.

Then it will become another stupid argument complete with racial undertones which will further divide us.

Example:
"Apa pasal itu Cina tak mau berdiri masa main lagu Negaraku?," said a Malay busybody about a Chinese couple who are too busy with their own personal stuff at one corner of the cinema and couldn't care less what song was being played at the moment.

Whatever it is, I just don't think we should force people to be patriotic.

Patriotism is this love for our country that we feel inside our heart. It needs to be inculcated, not forced.
Posted by Annie at 06:14