Tok Moy likely to be the new Johor MB

Johor will have a new Menteri Besar

Othman, who is a businessman by profession is said to be the preferred choice of the Johor palace.

As it turned out, it didn't happen and DS Mohamed Khaled Nordin became the MB while Othman didn't even defend his Kukup state seat. 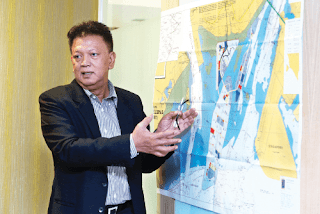 I'm not really his fan but I have to admit that the guy is actually quite good with what he does and his relations with the Johor palace is still very good.

Here is a story of him in action from August last year,


Now I have been informed that Othman is once again a candidate for the Johor MB post.

The info I got seemed so credible that I'm now once again putting my bet on Othman being placed as a candidate for his old Kukup seat and then made the number one guy in Kota Iskandar after this coming GE14.

As for Khaled, I was told that he is going back to Putrajaya.

The only other Johor Umno leader who was said to be still a candidate for the job now is Ayer Hitam division chief Samsol Bari Jamali who is also the party's current state information chief.

So, you all can forget about what I wrote in this post on Nov 1 last year


,
That one tak boleh pakai punya.

Okay, all these provided BN wins in Johor. The likelihood of that happening is quite high now, actually.

Well, that's all I want to tell you all today.