I had predicted it in this posting,

That deadline is on Friday. Pas and DAP are to decide Khalid's position on Sunday.

It will force Pas in particular to abandon Khalid.

Okay, let's wait and see if the key player in this crisis, Pas is as principled as it should be and stick to its position when the party's Syura Council made a stand to defend Khalid two days ago.

PKR has now went for broke. All its cards are on the table.

It knows DAP is standing behind it.

They are confident that Pas will blink, make some excuses, and abandon Khalid.

On my part, I am praying that Pas is not as cheap as that.

Well, yesterday, PKR launched its all out smear campaign against Khalid.

He was branded a traitor and painted as already being bought over by the BN government.

They basically accused Khalid of collaborating with BN for personal gains.

They said he was sacked because his personal debt to Bank Islam was almost certain to have been waived due to influence by BN.

They told the about 300 people present that Khalid had also likely grant favors in the form of land and contract to certain individuals in return for helping settled his about RM70 million debt to the bank.

Everything that Khalid did which were not agreeable to the PKR leadership were stringed up and categorized as acts of betrayal to the party. Of course all that were connected with the dastardly Umno, they said.

So, Khalid who had for years been touted by Pakatan as a clean and efficient MB is now suddenly a corrupted traitor.

Conspicuously missing at the PKR PC to sack Khalid yesterday was the master manipulator DS Anwar Ibrahim. He was also not at the special ceramah last night.

He is trying to create the aura of himself being above all the muck he created.

That, he leaves to his machai such as Saifuddin and Rafizi.

Also to be noted, all the PKR speakers at the ceramah in Shah Alam are Malays.

The Malays of Selangor are the ones who are most bewildered by Khalid's ouster. They always thought that their MB is clean and good.

That's one of the reasons why Pas tried to defend him.

Whether they are still going to do that is a very big question mark. We have to wait till their meeting on the matter next Sunday.

As for today, Khalid will meet with the Sultan of Selangor about half an hour from the time I am writing this to seek his royal highness' view on his next step of action.

They will be together at a religious function at 10 am today. 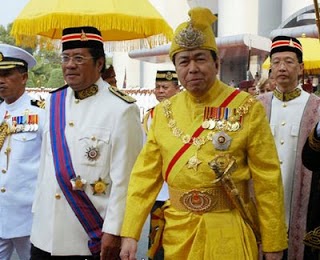 My bet is, the Sultan will say,

"Khalid, you just hang on. I will talk to the Selangor Pas and Umno fellas so that they will back you all the way. I don't want the crooks of Anwar's gang and all those DAP evangelist Zionists to run the show in my State."