I believe there will soon be a snap state election in Selangor.

Sultan Sharafuddin Idris Shah will very likely dissolve the State assembly when he returns from abroad on Aug 27.

Because his royal highness may want to settle the unnecessary mess created by the gang of PKR's DS Anwar Ibrahim once and for all.

I also don't think the cool Sultan will let Anwar get away with all the nonsense of trying to turn Selangor into his private family property by giving the MB post to his wife.

After all, Anwar and his wife are both non-Selangorian.

I also believe that the now independent MB TS Abdul Khalid Ibrahim will advise the Sultan to dissolve the state assembly. 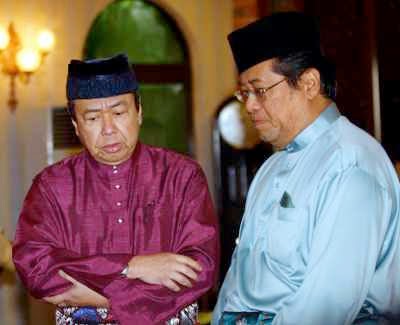 He would not want Anwar and the gang to win the State without having to go through a bruising fight.

After all, they had accused him of all sorts of things including being corrupted and selling his soul to BN.

He must also feel very pissed that Pas had stabbed him in the back and will not want that party to get away with it without paying a price. Read on and find out why Khalid may have his revenge over Pas if he wants it.

Khalid, I believe will make it as difficult as possible for Pakatan.

So, what will happen if there is a snap state election?

I am not so interested in DAP seats as I think they will have no problem defending them with the solid Chinese majority support in those constituencies under their control.

Attention should be in constituencies contested by Pas and PKR which have bigger percentage of Malay voters.

Let's go through them one by one based on the results of the last general election last year: I am putting the constituencies which BN stand a reasonable chance to win in blue.

And the one most under threat will be Pas, which stand to lose up to seven out of their current 15 seats. However, since they don't seem to mind being the junior partner in Pakatan and live under the DAP's armpit, I guess it would be fine by them.

DAP will be confirmed as the biggest taikor of Pakatan by retaining all their 15 Chinese-majority areas, as PKR may lose another three of their seats.

By the way, the 21 seats possibly to be won by BN will all be Umno's, making the Malay nationalist party individually having the most seats.

I am giving BN a reasonable chance of capturing the constituencies where they were beaten by not more than 3,000 votes in GE13.

I think that's not too outlandish considering that BN won the recent Teluk Intan by-election despite the constituency being won by DAP, the king of Pakatan, by more than 7.000 votes majority in the last general election.
Posted by Annie at 16:58