This just came out in Pas' Harakah,

They are going to perform the sembahyang hajat in the hope for Khalid to remain in his post.

Last night, the Pas Ulama Council had a meeting in Kota Baru to discuss their next step of action in the Selangor crisis. 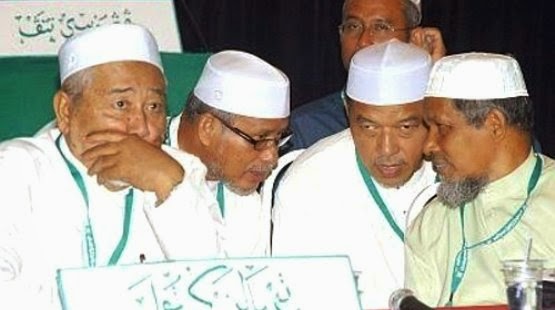 All this are in light of the PKR's move of issuing Khalid a show cause letter which in all likelihood will lead to his sacking from the party.

PKR's intention was clear, as Khalid was given only three days until tomorrow to reply to it.

It was to pre-empt the Pas and DAP meetings to decide on the MB issue on Sunday.

Khalid is likely to be sacked tomorrow or on Saturday, making him a non-Pakatan MB when Pas and DAP convene their meetings.

His reply to the show cause letter yesterday had already been rebuffed.

DAP has more or less made up their mind to go along with PKR but Pas which mostly are against it will be forced to decide if they are still going to support Khalid despite him being a non-Pakatan MB.

If Pas decides to stand their ground, they would have no choice but to quit Pakatan and work with Umno to defend Khalid's administration. This is very tough for Pas leaders, especially Nik Aziz who has for years been thwarting attempts at a Pas-Umno reconciliation.

But if Pas goes along with their Pakatan allies in removing Khalid, it will further diminish their standing as a party.

They will be seen as willing to compromise their principles and worst of all, it confirms allegations that they are a mere DAP's poodle and is under the thumbs of PKR's DS Anwar Ibrahim.

It will be a sad end for Pas and its supposedly Islamic ideals if it opts to go down that path just to be with DAP and PKR.

This Selangor MB episode, if it went according to the wish of Anwar of having his wife DS Dr Wan Azizah Ismail as MB, will also confirm DAP as the real Pakatan boss.

PKR's image will be badly tarnished for sacking for no good reasons an MB who is well liked for being "clean" while Pas, as argued, will forever be seen as a weakling who compromise its principles to no end for the benefit of especially DAP.

However, if Pas decides to stand its ground, it will be a day to be remembered as a start to a possible Malay Muslims reunification in this country.

I am sure Umno, under the DS Najib Razak will accommodate Pas in any reasonable way in order to enable them to work together for the betterment of a united Malay Muslim community.

The key is now in Pas' hands. It's for them to decide whether the Malay Muslims will remain divided and under siege as they are now or otherwise.
Posted by Annie at 09:05