He said Nik Aziz wanted him to try educate the hypocrites instead of destroying them.

Please read the newspapers today on the Pas' solat hajat ceremony at Khalid's house last night to double check on that.

Nik Aziz indeed appears to know who are these hypocrites, particularly among his friends in Pakatan. 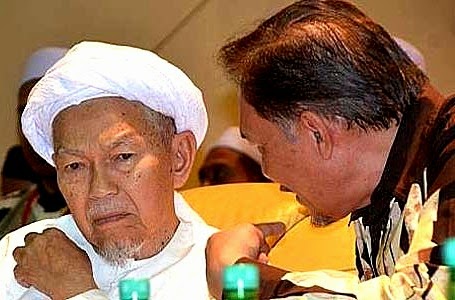 He had on Wednesday night led the Pas ulama of Majlis Syura in defending Khalid from the PKR's (or to be more precise DS Anwar Ibrahim's) scheming to remove him from office.

PKR had tried to force Pas to go along with its plan by initiating the show cause letter against Khalid which pave the way for his immediate sacking from their party before the Pas meeting to decide on the Selangor MB issue on Sunday.

Obviously Pas was not cowed as the Majlis Syura meeting and firm stand to defend Khalid is a pre-emptive strike to blunt the effect of PKR's possible sacking of the menteri besar which should be by today or tomorrow.

Now even the Mat Sabu gang who are Anwar's cronies among the Pas leaders were cornered as they could not be seen by the members as going against the ulama.

Nik Aziz must had realized that the whole Selangor MB crisis was initiated by PKR primarily to accommodate Anwar's greed and he doesn't want Pas to continue going down the slippery slope.

It appears that Pas is now ready to stand their ground despite Khalid being almost certain to be sacked by PKR.

This seems to be the breaking point for Pakatan.

Its a repeat of 2001 when DAP, then the weakest party in Barisan Alternative pulled  out of the opposition alliance after its relatively poor performance in the 1999 general election. Lim Kit Siang and his son Guan Eng, along with the late Karpal Singh were among the DAP bigwigs who lost.

It was a reverse of what's happening now as Pas, which is currently the weakest in term of parliamentary seats, was then the strongest opposition party.

But in all probability, PKR, realizing that it may lost the game to the unblinking Pas, could just declare that it was willing to reconsider the Khalid's position.

Actually, if that happened, the whole Selangor MB crisis will evaporate into thin air.

Of course, PKR will lose some prestige but then knowing their leaders' "thick skin" attitude, things will be back to normal after a short while.

But, no matter what it is, this is almost certainly Anwar's last move on the political chess board.

Nik Aziz was right about us having to be patient with a hypocrite.

Normally in the end, they will hang themselves with their own lies and treachery.
Posted by Annie at 08:05