The Pakatan leadership now appears to be trying hard to avoid the break-up of their alliance over the Selangor MB crisis.

It's actually easy, if Pas leaders just give in and stop supporting TS Abdul Khalid Ibrahim.

The problem is that the Pas grassroots want their leaders to stand their ground.

They feel that their party had given in to PKR and DAP far too many times.

Every time Anwar and the Lim family wanted something, they almost always got it, at Pas' expense.

In fact, Pas is no longer itself after joining Pakatan.

It doesn't even aim to set up an Islamic state anymore. They may make some noise about it but whenever DAP leaders or Anwar say hush, they will be quiet. Case in point is the kalimah Allah issue.

All that Pas got out of Pakatan is a more compromising image and some extra votes from the non-Muslim electorate, particularly the DAP-supporting Chinese community.

They voted Pas because they believe that their votes actually went to DAP. 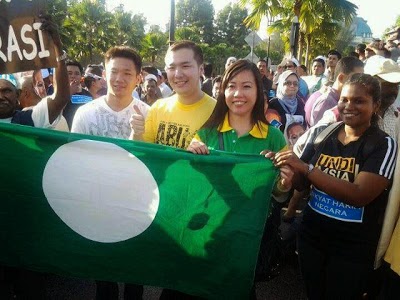 Whether they like it or not, Pas is now undeniably the junior partner in Pakatan. It has just 21 parliament seats compared to PKR's 30 and DAP's 38.

DAP is the actual boss.

DAP's  attitude towards Pas is that to befriend it as they needed Pas to break-up the Umno's Malay muslim electorate's vote bank.

That's about all the reason why DAP is willing to work with Pas.

Just look at the way DAP leaders react whenever Pas makes a stand over Islam, particularly if it affects their interests such as in the case of hudud issue.

And as almost always, Pas would either back off or went very quiet to appease its Pakatan partners.

For that, Pas' support among the Malay muslims electorate is sliding as could be seen during the last general election. They even lost Kedah to Umno.

Checking this slide is likely the real reason why Pas leaders are putting up a show of defiance in this Selangor MB crisis.

They need to show their grassroots that they still have the balls to say NO to Anwar and DAP.

But I believe it's just a show and nothing more than that. I predict that they will relent in the end.

I don't see how the Pas leadership can stand their ground without breaking off from PKR and DAP.

That is something I don't see them doing.

In fact, yesterday, Pas leaders were busy denying that they are leaving Pakatan following a prank using a fake statement using their letterhead to that effect.

Nonetheless, the Pakatan alliance does suffers over the Selangor crisis as you can read at Bee Kim's blog,

I guess that's unavoidable as Pas also need to appear strong in the eyes of its people.

However, for how long more Pas is willing to be treated as a religious village idiot party by its DAP and PKR allies is anyone's guess.

Don't be angry with me over the "religious village idiot" bit, as I actually borrowed that from your Melayu DAP friend Ariff Sabri, the Raub MP. He called your party, "parti tok alim kampungan".

Go and read it in his blog, if you don't believe me.

Yes, that's all what you are in the eyes of your DAP friends.
Posted by Annie at 06:47