I went shopping with a friend today.

Had my hair done.

My friend is from out of town.

She is staying with me for a few days to take care of some business in KL.

We had wanted to watch a movie but can't find any good one showing.

That's all they seem to be making these days.

Had lunch at one of those Japanese restaurants.

I had sukiyaki which was not so good.

It's nothing like the one I used to have at my favorite Japanese restaurant at Taman Pelangi in JB.

My friend was not complaining though. She finished her sushi set in no time.

She also topped it up with a small bottle of warm sake.

I just had green tea.

Haram to drink sake as it's alcoholic.

Well, I know that much, okay.

Since she enjoyed it so much, I let my friend paid for the meal.

Why I'm telling you all these?

I am tired of writing about politics.

Need to have a little break from it to recharge myself.

Writing about politics can actually be quite draining.

As you all may noticed, a lot of the sopo blogs had closed down or became inactive after last year's general election.

I guess those bloggers just got nothing more to write after that....or maybe no one wants to "finance" them anymore.

Can't blame them. Maintaining an active sopo blog can be quite expensive. You have to buy the bandwidth, maintain your computer, belanja makan your sources, etc.

I wish I have someone sponsoring me too.

But, as it is, I know that no one is willing to give me money while letting me write whatever I want.

That's the way it is. Nothing is for free.

Well, I like to be free and write whatever I want.

So, no sponsors for me.

I also need to buy a new computer soon.

This one I am using now has been quite wobbly of late.

I am saving bit by bit for it.

I am not good with money though as I tend to be quite impulsive with my purchases.

This is a new bag I bought today. It's for work. 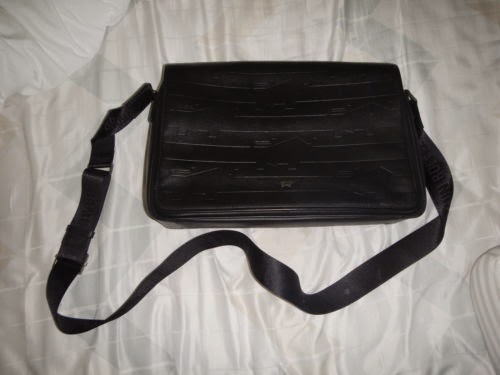 Nice, I think. It's quite expensive, okay.

Hmmm....sometimes I wish I have a rich boyfriend who can buy me nice stuff so that I can save my money instead to buy things like a new computer.

But I am not pretty enough to get a rich boyfriend.

Just so so only...hahaha. Poor boyfriend also cannot get la.

Sometimes I miss that Chinese guy who used to buy me dinner from time to time.

It was nice hanging out with him.

But like all other guys, he also wanted the one thing I am not willing to give.

When he still asked for it, I told him to buzz off.

That's the end of it.

Not as if he is serious enough about me, anyway.

Well, men are all bastards.

Okay lah. Enough of my nonsense.

I am going to sleep now.

Here is a bit of music for the night,