Who would have thought that the harmless clownish looking and stuttering TS Abdul Khalid Ibrahim could had outwitted all those DAP and PKR leaders. 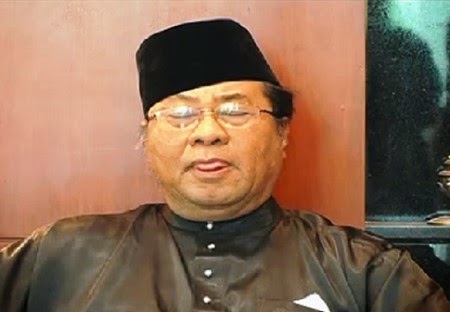 Yes, that's the man who almost single handedly crushed DAP and PKR in Selangor, and probably started the total dismantling of the whole Pakatan coalition.

Yesterday, Khalid delivered his deadliest blow to his enemies so far by sacking all six DAP and PKR exco members in his administration, effectively ending the so called Pakatan government in Selangor.

The six, under the instruction from DS Anwar Ibrahim and the Lim family had tried to be funny with Khalid by issuing a statement earlier in the afternoon saying that they will stay as exco members but will not work with Khalid.

They totally didn't see it coming. Khalid, in one swift move chopped their head off, figuratively.

"Ooooo....mau kurang ajar sama aku yaaaa....nah kau!!!!" I imagined him saying that as he send out those termination letters.

Khalid had made it known that he didn't mind working even with his enemies but must had anticipated the move by DAP and PKR as he seems to have prepared his own moves in advance by working closely with the Selangor palace.

He met the DAP and PKR excos in the morning, got their kurang ajar letter in the afternoon, told everyone that he was informing the Sultan that he was sacking the buggers about 6pm and before 8pm had received the royal consent and had the termination letters sent.

He must had also got the Pas and Umno leaders onboard too.

Sultan Sharafuddin apparently had full confidence in Khalid when it was made known by palace officials that his royal highness had rebuffed Anwar's attempt to seek audience for his wife DS Dr Wan Azizah Wan Ismail to explain their version of the Selangor crisis.

To rub salt on the injury, the cool Sultan reiterated his support for Khalid as MB yesterday, dispelling any doubt that his royal highness was unaware of what's happening in his state, as tried to be depicted by Anwar and the gang.

I was told by a journalist friend who was at the Pakatan press conference at the PKR HQ last night, that the mood there was definitely as the Malays of old would say "seperti baru dilanggar garuda".

Conspicuously missing at the Pakatan emergency meeting were Pas leaders. I believe they had already crossed the Rubicon and will soon be announcing their departure from Pakatan.

It's a repeat of the dismantling of Barisan Alternative in 2001. The difference is that, back then it was DAP, then the junior partner in the alliance being the one which left.

Guan Eng rattled away with all sorts of nonsense about Khalid having no right to bully them etc and demand for Pas not to cooperate with him.

I listened to my journalist friend's recording of the PC and laughed.

Guan Eng was jumping all over to showcase his usual tantrum. Real kindergarten stuff.

Aiyo Guan Eng, you and your gang were totally outclassed by Khalid la. Just admit it, okay.

Today will be another round of the fast paced Selangor crisis drama.

Khalid will have his first meeting with the remaining four Pas exco members.

I am quite sure he will pull another few other surprises later this afternoon to totally pulverize his already battered enemies.