Fresh attempt to cause a clash between Dr Mahathir and Najib

When I saw this posting

by former PM Tun Dr Mahathir Mohamad, it reminded me of a conversation I had with an old friend, who is a former senior Johor Umno leader about two weeks ago.

My friend said there was a fresh attempt to cause a clash between Dr Mahathir and PM DS Najib Razak. 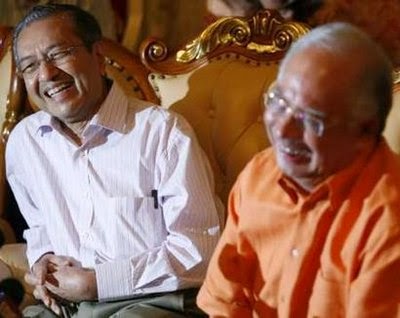 He said the instigators of this latest plot are trying to feed Najib with information suggesting that Dr Mahathir is heading a group of people who wanted to topple the current administration.

"They are suggesting that Dr Mahathir is trying to get the whole thing done before the end of this year," my friend said.

I had not taken my friend's word too seriously as such an attempt to drive a wedge between the two leaders had been attempted before.

I thought that it was an old information.

When I read that posting by Dr Mahathir, I realized that my friend had told me something which is quite current.

I feel the tone used by Dr Mahathir in that posting was meant to clarify his position, particularly the reasons why he had given his views regarding certain Najib's policies which he feels were not really good for the country.

I believe that Dr Mahathir had been informed of the latest attempt to cause a rift between him and Najib.

That posting was I think his attempt to clear the air.

Not at any point of that posting did I detect any attempt by Dr Mahathir to incite any rebellion against the Najib's administration.

The criticisms he aired in the posting were not new, several which I had myself voiced in this blog.

The message that I got from that Dr Mahathir's posting was that he wanted to make it known to Najib and the people in the PM's circle that his criticisms were sincerely for the good of the nation and for Najib to do better for the country.

I feel the same as Dr Mahathir in the sense that the power-that-be was better of being criticized by members of the pro-establishment, who wanted them to do better rather than by the opposition crowd whose intention was nothing but to bring down this government.

Criticising the establishment so that it will do better for the country was also my motive when I went all out on certain issues such as the need to check on the excesses which afflicted my home state Johor.

Of course, Dr Mahathir's posting was pounced upon by the pro-Pakatan media such as The Malaysian Insider which spin it as if the former premier was launching a new round of attacks against Najib.

I am not going to provide a direct link to that portal in this blog, but you can get it at the blog of Syed Akhbar Ali who is currently a fierce critic of the Najib's administration.

Syed Akbar highlighted the Malaysian Insider's article complete with his comments on it here,

I respect Syed Akhbar as a senior blogger but in this case I have to put it on record that I disagree with him.