TS Abdul Khalid Ibrahim at the moment seems to have the upper hands in his fight against the PKR and DAP leadership.

Yesterday, he got the Sultan of Selangor's endorsement of his administration after he managed to convince his royal highness that he still commands the majority of support in the state assembly despite being sacked from PKR over the weekend.

His announcement that he is staying on in power as expected leaved his PKR and DAP enemies screaming and howling.

They even accused Khalid of lying to the Sultan about his majority of support in the state assembly.

Khalid didn't seem to care about that. To rub salt to the gashing wound, he even challenged PKR and DAP to test whether he has such a support.

The onus of proof, however he said is on the ones who challenge him.

Khalid understandably was not in a very charitable mood as far as his enemies were concerned yesterday.

After all, they had smeared him with all sorts of dirt even before they sacked him on Saturday.

He obviously wanted to squeeze his enemies' balls until they are down on their knees.

He said there will be no special state assembly session to enable a vote of no confidence to be tabled against him.

If PKR and DAP want to do that kind of drama, they have to wait for a normal assembly session, which will be in November when Khalid is to table the state budget.

But by that time, DS Anwar Ibrahim. who is the real culprit behind the whole mess will probably be in jail again for sodomy. His final appeal will be at the Federal Court, two days from now.

As for now Khalid can count on the support of the 15 Pas assemblymen, 12 from Umno and two or three from among his supporters in PKR.

I believe the Sultan of Selangor has this same information when he decided to give his royal consent for Khalid to continue with his job.

PKR and DAP people who yesterday accused Khalid of bluffing the Sultan obviously have very low opinion of his royal highness that they doubt he knows anything at all about what is happening in his own state.

Well, since PKR sec-gen Saifuddin Nasution and DAP Selangor chairman Tony Pua are the ones who signed their parties' joint-statement to that effect, I think they should go and see Sultan Sharafuddin and explain their version of truth to his royal highness.

They should tell the Sultan that they are actually the ones who control the majority support in the state assembly.

And while they are at it, I would like to suggest for them to tell the Sultan to let Pakatan (or to be more exact PKR and DAP, since Pas has obviously abandoned them at least in Selangor) the power to govern Selangor once more.

But knowing how cool the Selangor Sultan can be, I think he is going to say these, 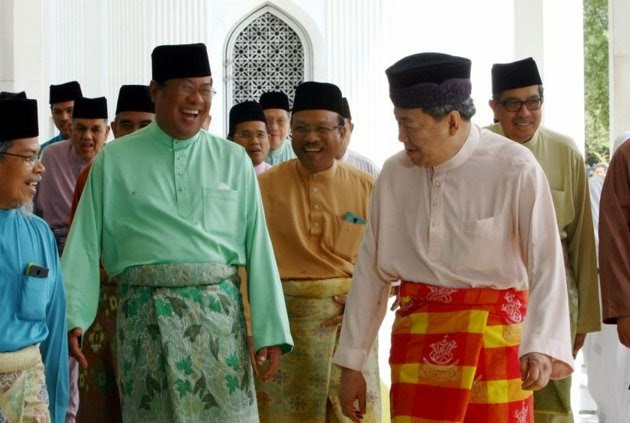