Johoreans should set aside politics to save their state

excerpts:
The Pas VP wants Tun Dr Mahathir to continue to champion the interest of the people of Johor i.e. The Iskandar region and issues surrounding the foreign direct interference via foreign direct investments facilitated by the royalties and a subservient state government.

I am actually glad that the Pas VP, Salahuddin Ayub had admitted that there is a serious problem in Johor and that Pas and its Pakatan allies are not capable of being the check and balance of the issue on their own. 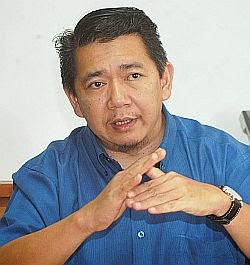 The fact that the Johorean Pas leader had even acknowledged the importance of
Dr Mahathir's voice in the effort to save Johor shows that the crisis is already  quite critical.

For me, the issue is beyond petty partisan politics as it affects the rakyat as a whole.

I had during the Pas elections a few months ago met a very high ranking national Pas leader from Johor and told him of my worries about the environmental impact of one of the reclamation projects currently carried out along the Tebrau Straits.

I had asked the Pas leader to voice out the problem as at that time I was desperate for someone to champion the cause to stop the excesses in my home state.

The Pas leader acknowledged the problem caused by the project but had only this to say to me,

He told me, that even DAP was cautious about their objection against the project.

He, however, just shrugged when I asked him whether DAP is actually happy with the reclamation projects as in the long run, they will benefit the Chinese-dominated party as the Malay population will be pushed further into the Johor hinterland by the unbridled development.

Maybe Salahuddin has seen the danger of those projects, especially to the Johorean Malay Muslims, thus his call for Dr Mahathir to voice out his objection against them.

I do not blame Salahuddin for doing so. Pas actually is with just a little voice in Johor being a junior partner of the Pakatan in the State.

Of the 18 Pakatan's State seats in Johor, Pas only have three as compared to DAP's 14. As for Parliament seats, DAP has four, PKR has one, while Pas has zero.

Maybe Johor Pas has by now realized that they were only used by DAP in the effort to break up the Malay vote banks in the State.

Actually, Pas too could benefit from the current situation in Johor as more Johoreans, in particular those in the urban areas may switch to their side or stopped supporting Umno after being repulsed by the ongoing excesses.

But I guess, their leaders such as Salahuddin sees no point in Pakatan winning the State if the Malay Muslims ended up living on the fringes of the rapid development which was actually not meant for them.

That's probably why Salahuddin went to the extent of calling for Dr Mahathir's help to save the ummah in Johor.

In that sense, maybe Salahuddin is not such a bad guy.

It would be nice if all Johorean leaders, notwithstanding their political affiliation could sincerely work together to save our home state.
Posted by Annie at 15:38