It's been a week of Ramadhan.

I am okay with the no food and drink restrictions.

No problem at all as I don't eat and drink much anyway.

The harder part is about having to be a good girl.

I am not a good girl.

Well, not as according to the usual interpretation of what it supposed to be for a good Muslim girl. 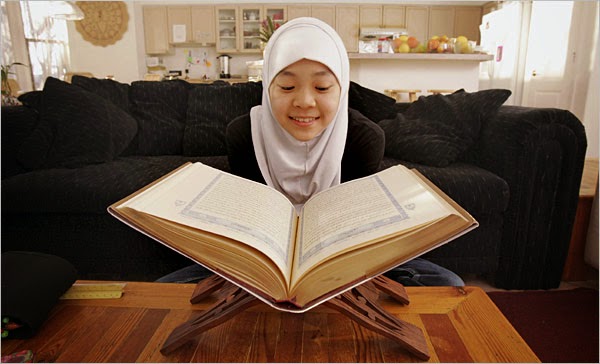 I don't wear a tudung, have dyed red hair, wear mostly a bit tight and short clothing and I swear quite a bit in normal conversation.

I think most, if not all my pahala puasa went up in smoke just because of my swearing.

I am trying to limit it though. For instance, I hardly write such profanities in this blog.

Anyway, fasting, to me, is the third easiest of the five basic things to do for a Muslim.

The easiest to do is reciting and believing the Kalimah Syahadah - professing that Allah is the only existing god and that Mohammed was god's prophet.

That I can do rather well.

My mother, however, once told me that it was not straight forward easy for her.

When she first fell in love with my father and wanted to marry him, it was hard for her to sincerely believe in the existence of a god as required for a Muslim .

She was at that time officially a Taoist but actually an atheist.

The thought of converting to Islam was also scary with all those talks about terrorists, stoning adulterers to death, chopping of hands etc.

She also thought that it would be hard for her to give up eating pork and her favorite Japanese beer.

However, she said my father had only asked her for only one thing - to believe that there is only one God.

My father even said she can eat all the pork that she wants and drink as much beer as she can consume.

All he ever wanted for a start was for my mother to believe that Allah is the only god.

With some effort she did, and after a while things turned out alright. My father never demanded anything from her except for the first request. Things simply fell into place after that.

My mother, however, is not the typical Malaysian Muslim convert. She didn't change her name and still behave and look very much like any other non-muslim Chinese lady.

Okay, now, the second easiest basic thing to do as a Muslim for me is paying the tithe or zakat.

Just fill up the necessary forms and pay the required amount at the pejabat zakat.

Very easy. It's basically a bit like doing charity.

Next to fasting during Ramadhan in term of difficulty to fulfill as a Muslim is going on the pilgrimage to the Holy Land in Mecca.

It's a one trip in a lifetime for any Muslim who can afford it.

It's not going to be very easy for me to do that one, but I think one day I will be able to afford it and actually make the once in a lifetime trip.

Also, the experience is great, so I was told by those who had been on the pilgrimage.

Makes you feel really close to Allah, they said.

Now, the most difficult basic thing to do as a Muslim for me is performing the five times a day prayers.

It's shameful but I do admit, I am struggling on this one. I simply don't have the discipline.

Whatever it is, I am trying to improve on it.

Insyaallah, hopefully one day I can get it right and perform my solat accordingly as required of me.