He doesn't want DS Abdul Khalid Ibrahim to be removed as Selangor MB.

And the result of it was obvious :

No wonder Hadi was not present at the Pakatan's presidential council meeting on Tuesday.

Opposition leader DS Anwar Ibrahim had tried to use that meeting to show that all Pakatan parties are united in wanting his wife DS Dr Wan Azizah Ismail as the new Selangor MB and Khalid to be ousted.

Today, the Pakatan camp appeared to be still reeling from the Hadi's upper cut which seems had floored Anwar and practically destroyed his Selangor dream.

Their news portals were scrambling to put up headlines such as these to limit the damage,

But seriously, what is Hadi trying to do by backing Khalid?

I had given it some thoughts and here is my top 10 likely reasons why he decided to risk breaking up Pakatan by not giving way to Anwar's plotting against Khalid :

1. He knows the PKR sharks are waiting to pounce on all those lucrative contracts and other whats-not in Selangor once the follow-the-book Khalid is gone.

2. Anwar will have a hell of a party in Selangor once his wife, who is living under his thumbs became Menteri Besar.

3. The DAP evangelists will have full freedom to do what ever they want in Selangor if Khalid is removed. Issues such as the bibles seizure will go the evangelists' way and this will make Pas people look really dumb.

4. Pas will lose what ever left of its credibility as a party which supposed to be the defender of Islam because a Selangor government under Dr Wan Azizah will likely be more pro-DAP than pro-Pas.

5. Pas has everything to lose if the Malays in Selangor were not happy with the change of State government leadership while DAP will strengthen its position as the Chinese community will continue to vote for them no matter what kind of shit they do.

6. Hadi must had realized that the Pas' non-ulama faction led by Mat Sabu, who are backing Anwar's move will become more powerful than that of the ulama faction which he is a part of, if they get their way in Selangor.

7. Now that Pas' mursyidul am Datuk Nik Abdul Aziz Nik Mat is more or less retired. Hadi may feel that it's better to be friendlier with Umno than DAP, which clearly objects to Pas' struggles and PKR, which from day-to-day proved itself to be worse than Umno. 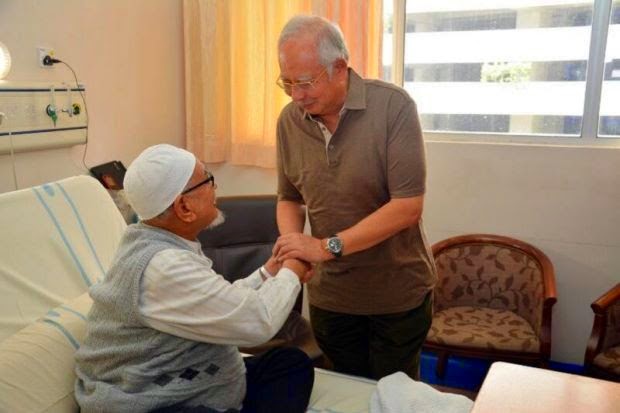 8. Hadi was probably irked that Anwar had meddled in the internal matters of Pas by planting his agents known as Anwaristas within the party's ranks. Mat Sabu and the gang even appeared to be living in Anwar's pocket by agreeing to all his whims and fancies. Hadi probably thinks that the Selangor crisis is the best opportunity for him to tell Anwar and his fanboys in Pas to f#*k off.

9. Hadi may likely has become smarter and realized that there is no future for Pas if it continues working with DAP. DAP's ultimate aim is after all to dominate everyone the way its Singaporean parent PAP did on that tiny island down south. Backing Khalid is probably the best way Pas could assert its power in face of the DAP's arrogance.

10. Hadi cannot tahan the pig smell in Pakatan anymore.
Posted by Annie at 15:47