Helen posted this about two hours ago,

Palestinian dead and the hypocritical living

Helen was as usual trying to tell the Muslims, particularly the Malays not to be conned by the DAP evangelist Hannah Yeoh and her gang. I hope Helen doesn't mind me simplifying her message here for the benefit of the intended audience. 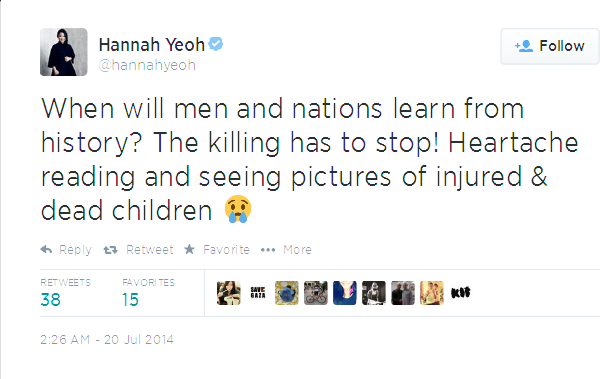 It's another one of Hannah Yeoh's con artist tricks, similar to her wearing tudung and going to mosques to show how Islam friendly her party and herself are.

It's something like what the Americans and other supporters of Israel do to show that they are humane while continuing to support the murderous Israelis.

Do you know why evengelists such as Hannah Yeoh and others of her kind in DAP will never condemn Israel for being more barbaric than the Nazi?

If you don't, then read this,


Don't be scared to read it as it's just an article in Wikipedia and not some Islamic nut case propaganda manual.

If you are still not convinced, then read what the Islam hating evangelical American preacher Pat Robertson has to say about the whole thing,


Really, I am not kidding you.

The evangelical Christians believe that it's okay for the Israelis to kill the Palastinians because the Jews are the chosen people.

These evangelical Christians include all those DAP leaders such as Hannah Yeoh, Theresa Kok, Ong Kiang Ming, Teo Ni Ching and many others.

I even suspect handsome boy Guan Eng to be among them.

Well, I hope some Pas people will leave their comments in this posting to refute what I wrote here.

It will be fun to read them go on the defense of their allies, the Christian Zionists of DAP.

Meanwhile, as Muslims elsewhere are preparing for Hari Raya Aidilfitri, the death toll in Gaza continues to increase and as at the moment I am writing this it stood at 762.

You can read about it here,

At least 15 killed by shelling of Gaza school; toll exceeds 760