Love can be quite a bitch, okay.

Now I am doing a bit of research on Kumpulan Perasarana Rakyat Johor (KPRJ).

KPRJ was set up by former Johor MB Datuk Abdul Ghani Othman. It was to enable the State government to build proper infrastructures in the rural parts of the State.

It was one of the first things that Ghani did when he became MB.

The village roads, community halls etc may not be grand for most people living in the big cities, but it actually meant a lot for the kampung folks.

A properly tarred village road, for instance, would make it easier for villagers to transport their farm produce to the market place. It also enables their children to go to school in proper transportation like those kids in the cities.

Of course there had been all sorts of allegations thrown at Ghani because of KPRJ. Even senior pro-establishment bloggers had attacked him because of it, all the way to weeks before the last general election.

I am not going to argue on that now as I don't see the point in it.

After all, among the first things that DS Mohd Khaled Nordin did when he become Johor MB was to send a forensic audit team to find Ghani's hanky panky in KPRJ. 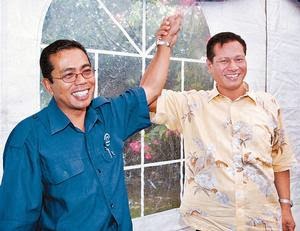 The findings of the audit was presented to the Sultan of Johor.

Much to the disappointment of many anti-Ghani people, they found nothing which could be used against the guy who have been their leader in Johor for 18 years.

I could name those involved in double checking the audit report here because someone was so disappointed that Ghani had not done anything wrong, but what's the point, isn't it?

Nonetheless, I am once again checking on KPRJ as I was informed that the bulk of excesses which were committed in Johor the past one year under the new State administration were linked to it.

Apparently, the organization which was set-up to help the poor has now become a vehicle for the rich and greedy to further enrich themselves at the State's expense.

There was this comment to one of my past postings, which indicated how KPRJ has now been transformed into something it was not meant to be,

Anonymous21 June 2014 22:44
I don't understand why Khalid Nordin should lie to the public, especially Johor's. He is the Chairman of Kumpulan Prasarana Rakyat Johor (KPRJ). Yet someone higher up is controlling the Company. He cant even control the CEO Datuk Moy, who had claimed that his monthly remuneration is being determined by the Sultan.

Land for the Forest City is owned by a dummy company owned by the Sultan's crony. For the use of KPRJ's name, KPRJ was paid RM300 millions after title issued. The title is freehold. Daeng Malek is board member of CGPV.


Part of my research on KPRJ now include these sorts of things.

I am not very good at doing meticulous research but I am trying. It will take a bit of time though.

Well, I will write about it once I got everything in place.