Singapore probably scared of Johor too

Apparently, even the Singaporeans were a bit scared of what's happening in Johor.

Here is the story I took from Channel News Asia,


SINGAPORE: Malaysia has provided Singapore with some general information on the two reclamation projects along the Straits of Johor, said Senior Minister of State for Foreign Affairs Masagos Zulkifli in Parliament on Wednesday (July 9), and the Government will assess the information and conduct its own studies to see how the projects will impact Singapore.
Singapore had raised concerns on the potential transboundary impact, with Prime Minister Lee Hsien Loong and National Development Minister Khaw Boon Wan highlighting the issue with their Malaysian counterparts.
The concerns come amidst reports that no environmental impact assessments were conducted. Mr Masagos said Singapore was not given prior information on these reclamation projects, and he highlighted some concerns.
The projects could increase the strength of the currents in the Straits of Johor, potentially affecting navigation safety. It could also result in the erosion of the seabed and foreshore defences that support the infrastructure of the Second Link between Singapore and Malaysia. It may also affect the water quality along the Straits, impacting the coastal and marine environment as well as the fish farms in the area.
Mr Masagos said Malaysia provided some preliminary information on the two projects on June 30. It also promised to share all other information, including environmental impact assessments, once internal processes are completed.
"Malaysia has stated that no reclamation works are currently being undertaken on these projects and that it remains committed at fulfilling its obligations under international law and will take all necessary matters to avoid any adverse transboundary impact," he said, adding that Singapore is seeking clarification on some of the information provided and waiting for more to come through.
Dr Lim Wee Kiak, MP for Nee Soon GRC, asked if there would be changes in the boundary lines of the two countries after reclamation is completed, and what the course of action would be if Malaysia decided to go ahead with the projects even if they had a potential environmental impact.
Mr Masagos said it was premature to talk about any development at this stage. He said consultation and information exchange must be allowed to go forward before hypothesising, and that the boundary lines between the two countries do not change with any reclamation by either of the countries.
- CNA/xy


Somehow, I believe the Singaporean authorities were not very happy with the explanation given by our government over the massive reclamation projects being carried out in Johor.
That likely what prompted them to take their own independent initiative to check on the impact of the projects on their environment and sovereignty.
Unlike Malaysia, Singapore is very particular about such things.
Now, if their studies found that the reclamation has adversely affect their environment and encroach their territory, they will demand for all of the the projects  to be stopped.
It's the same thing that happened when Malaysia complained about the Singapore's reclamation works, particularly that at Pulau Tekong about 10 years ago. 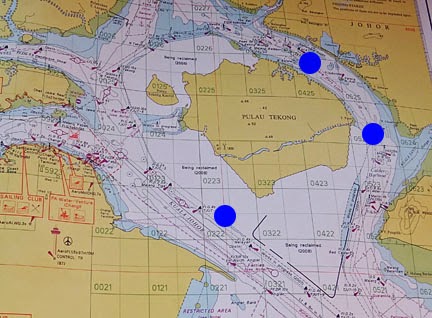 I am sure Singapore will go for international arbitration to enforce their findings.
If those reclamation works now being carried out along the Johor side of the Tebrau Straits were stopped, the outcome, I believe could be devastating to the state.
The investors who had poured money there would have to pull out, incurring losses by the billions of ringgit.
It could also spell the end of Iskandar Malaysia.
This is so because no other major investor will then dare to go into Johor for fear of similarly getting burned.
I wonder, what had the state government done to advise those Chinese companies and their local partners about the risk of such things when they started the projects.
Did Khaled and his boys said the following to them?
"It's okay, we are the powerful ones in this State and therefore we can do what ever hell we want. No body can touch us. We have BIG LICENCE  bro. You don't have to worry about EIA reports and all those other bureaucratic red tapes. Just come over with your money, and kita boleh same-sama buat untung dan laba yang besar."
Now, let's wait for the Singaporean government's move.
Knowing a bit how Singapore do things, I believe it's not going to be very pleasant.
I also believe that if the Singaporeans were to take the step of stopping the reclamation projects, they would not be alone as some quarters on this side of the border may want the same thing too in order to check the excesses in the State.
Bear in mind that Singapore-Malaysia relation is currently at an all time good.
Posted by Annie at 18:41