Honestly, I am getting tired of writing about Umno politics.

Even the most inspiring Umno guy for me at the moment is not likely to step up to the task of saving the party.

Well, if the Umno people want to maintain the status quo with the same old tired faces, then I think  I better write about something else.

I'm simply not inspired to write about their stupidity anymore.

Seriously, are you inspired by things such as DS Shahrizat Abdul Jalil retaining her post uncontested? 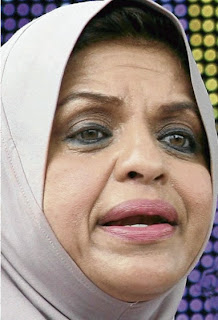 After all that had happened? How many hundred thousands of votes do you think BN lost in GE13 over the NFC fiasco? What? She is not guilty? Fine, but do you think the ordinary people out there believe that. It's all about perception lah. Can't she sacrifice to avoid the party from being affected by the scandal?

Never mind. That's all water under the bridge.

Tonight, I'm just going to have some fun instead. I'm going to kacau the top Chinese newspaper for trying to be insidious but ended up being simply moronic.

This is a translation of a commentary without a byline. The translator's name was however given. Sin Chew's will be in black while mine in red.

2013-09-09 15:14
Translated by SOONG PHUI JEESin Chew Daily
After revealing the lost of secret societies and their logos in mid August, the police launched the massive and vigorous Ops Cantas Khas nationwide, causing gang members either flee or arrested. More than 1,400 suspects were arrested in just 10 days, showing a visible result.
Although the operation might not be able to immediately uproot secret societies in the country, it can at least hit the arrogance of secret societies. The police's efforts in taking a series of actions, including having roadblocks nationwide, detaining suspects, busting a hideout of gang members and seized firearms and nabbing gang members trying to cross the country's border at the Immigration, Customs and Quarantine Complex in Bukit Kayu Hitam, should indeed be recognized.
Wah! For once, a Chinese newspaper is applauding actions by the police. Normally, they say police are bad all the time one.
However, the police has recently expanded the operation to shopping malls and public transport stations. Such manner and venues are worth reviewing.
Ooppss! I talked too soon. Of course there will immediately be "but" and "however".
Groups of armed troops had actually walked into the bustling Station Pudu Sentral, crowded Bukit Bintang, the KLCC, Central Market and Kota Raya shopping malls, alarming people doing their shopping, passing by elders and children, as well as tourists. These famous shopping malls are favourite tourist attractions. Although the existence of heavily armed forces could bring deterrent effects, it would at the same time scare the public and affect the joyful atmosphere of shopping centers.
Armed troops affected the joyful atmosphere of shopping centers? Really? Hmmm...these policemen are such kill joy then. Ya la, last time they are also bad during the Bersih rally too. Policemen like that one lor. Always kacau people one. Betul la apa itu Tony Pua and Ambiga said. Sheeesssshhh....
Although gang members or those attempting to commit crimes might hide in shopping malls, the police could just send ordinary law officers or plainclothes detectives to guard or patrol the malls. A large group of heavily armed troops was deployed but only a couple tattooed with secret society logos, pedestrians who did not bring their MyKad, foreign workers and motorcyclists with expired road tax were arrested, showing that the enforcement approach brought only limited success.
Enforcement approach brought limited success meh? How you know? You crime expert ka SinChew writer? Just because you go dating at KLCC, then see policemen doing their job in the way that you don't like, you think they don't know how to do their job ka? You think they went there all in gear just to kacau you dating ka? You think they got nothing else to do, is it? If they are all fully equipped, that means there is a reason for them to be so. You think you are so big ka want to tell them how to do their job? It's not you who put your life on the line to protect the public, ok.
The police had earlier revealed the list of secret societies and claimed that they knew the areas where gang members were active in. Actions should be taken then since the law enforcement authorities already have sufficient information about the gangs. The police should just trace the hideouts of gang leaders and nab them. Sure some gangs would be collapsed.
You think police simply simply make that kind of statement ka? They have strategy la. And issuing those statements are part of it. They don't want to tangkap the small fish only, ok. How long you become reporter kawan? That one also you don't know why, you better quit your job and sell koey teow la. Make more money. You think I don't know ka Chinese newspapers very stingy one. Pay you all lousy salary.
Home Minister Datuk Seri Dr Ahmad Zahid Hamidi also confirmed that the ministry has identified politicians who are members of secret societies. If the police has sufficient evidence, these gang members should then be arrested instead of spared because of their political power. Meanwhile, the police should not take political revenge against those who are innocent in the name of curbing crimes.
Eh, you think I don't know ka what you are trying to imply here? Police working in cahoot with BN to go after opposition leaders, particularly those of the DAP on the pretext of fighting crime. Isn't that what you Sin Chew writer trying to say? Bloody insidious la you little f****r. Just with this one paragraph you are trying to sow the hatred against the police among your Chinese readers and at the same time trying to preempt any event where police found Pakatan leaders, particularly those from DAP having ties with criminals. Eh, Sin Chew writer, Ronnie Liu bribed you to write this article ka?
It is the police's responsibility to fight crimes and restore peace. However, the actions taken must be appropriate to avoid overdoing it and creating disturbance instead. It would not worth the candle if public discontentment is provoked.
Sin Chew translator, you pegi sekolah mana translate ini macam? Kalau you study in Taiwan please jangan ini macam. Mak saya pun belajar Taiwan tapi tak ada ini macam. Kalau saya cakap sama dia nanti mak saya sangat malu dan marah sama awak tau. Itu last sentence makes me laugh la kawan. Sangat dramatik la itu "public discontentment" punya perkataan.