Saw this via NST SMS alert:

NST 22/03 Producers of BFM Kupas and presenter Aisyah Tajuddin will be probed under section 298 of the penal code for blasphemy : IGP

I have seen the video.

Actually, I think she should instead be probed for being irritating and coming up with a lousy sketch.

Blasphemy is a bit too serious, I think.

Guess after that the police are going to probe the death, rape, and burning threats directed at the silly girl.

Hmmm...whatever it is, I think freedom of speech and expression is going to die with this hudud thing.

And there was a commenter in this blog who questioned why I need a Dragunov rifle once this country becomes a full fledge Malaystan.

Chinese, let me tell you that your tsunami had wiped out the moderate Malays who all these while had been shielding you from the crazies.

Do you all know that?

You think Guan Eng and his DAP gang are your saviours?

Guan Eng and the DAP gang were the ones who unraveled all that you have now.

Pas is their ally, remember? 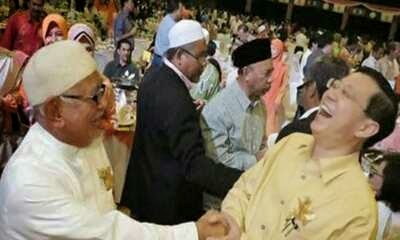 Pas is the one who sell itself to the Malay Muslims as the hudud champion.

Umno, weakened by the Chinese tsunami just played along as it can't be seen as anymore less Islamic than Pas.

After all, there's only the Malay votes for them after you all Chinese abandoned them during GE13,

Bear in mind that it's those irritating tak-apa Umno Melayu buggers who actually enabled you all Chinese to prosper all these while.

Now, there's only the hardliners, trying to out-Islam Pas.

PM DS Najib Razak is probably the last moderate one, but I think it won't be long before he succumbed to the hudud tsunami.

Now, you all Chinese want to help Najib and the other Malay Muslim moderates or not?

Up to you all, okay.

Migrate is a good option too.
Posted by Annie at 11:53