Nope, I was not working hard and come home late from office as usual.

I actually finished work earlier than usual but someone asked me out to have dinner.

The guy is a rich Indian dude.

He has been trying to be sweet to me for quite a while, but I'm not interested.

After all, the guy is married and I think he has a girlfriend or two (or maybe more) on the side.

But still, he is charming and actually meant no harm.

So, I said okay...it's just dinner after all.

We had dinner at an Indian joint....very typical, but I'm fine with it.

Among others, we talked about politics.

He knows that I'm into all that shit.

His main question was on the DPM TS Muhyiddin Yassin's statement on 1MDB yesterday. 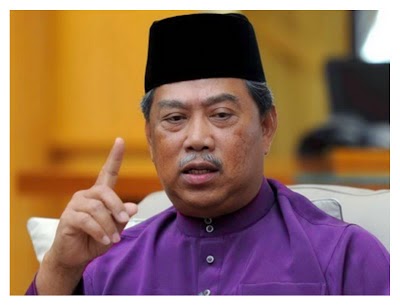 You can read the whole thing at Apanama's

The guy asked me what Muhyiddin was trying to do.

I know that he is a supporter of PM DS Najib Razak, but I didn't want to bullshit him.

As you may noticed, Apanama straight away used the "no bail out" part of the statement as the title of his post.

It makes the statement by Muhyiddin looks very much like he was closing all the easy exit doors from the 1MDB issue.

So, I told the guy that I read it as an indication that Muhyiddin was testing the water ahead of tomorrow's meeting between Najib and all the Umno division leaders.

1MDB is after all Najib's biggest headache at the moment.

Worthy to note that the meeting was supposed to be an internal thing but The Star which I don't think care much for Umno had broke a story about it last week, thanks to the big mouth of people like Bung Mokhtar Radin who was the first Umno division chief quoted by the newspaper on the meeting.

I do wonder if the Umno division chiefs quoted by The Star have sinister motives towards Najib and wanted the meeting to fail.

Either that, or they were just plain stupid and gila glamour.

Whatever it is, the Muhyiddin's statement reminds me of what I wrote during the Umno general assembly in November last year,

Something may be brewing in Umno


Well, I don't want to speculate beyond that, as I could be wrong.

Actually, I'm hoping I'm wrong, because if I'm right, I will really have to choose side.

I simply hate to do that.

Anyway, back to the rich Indian guy who bought me the dinner....I think he is worried by the prospect of an internal Umno power struggle.

He stands to lose a lot if Najib is ousted.

Many more will suffer.

So, Najib's people must be prepared from now on to work hard.

They also need to be nice...especially to people like me who occasionally do crazy things such as defending Rosmah :-)

Otherwise, they will sink.

I told that to the guy.

However, out of the blue, the guy asked whether I would like to go to a nice place with him.

Shit, the guy was not paying attention...his mind was on other things.

Wasting my time only explaining the whole thing to him.

It's after all him who asked me to tell what I think about the whole thing.

I politely said, I can't follow him to the nice place as I have a lot more to do in the coming days.

Then we changed topics to the ones which were more personal in nature.

Those I can't write here.