I am in a small hotel room in PJ now. Bored. So, I am writing this to while away the time.

Okay, the hottest political story at the moment is the Selangor leadership crisis.

Pakatan, I believe is on the brink of breaking up because of it.

There is no way now for DS Anwar Ibrahim, who engineered the Kajang Move to instal himself or as it turned out later his wife as Selangor menteri besar (MB), can pretend he doesn't mind his wife being belittled by Pas president DS Abdul Hadi Awang. 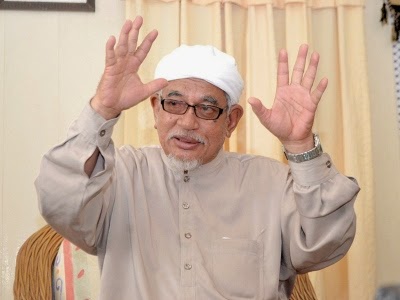 You can read it at this today's NST front page exclusive report here:

Hadi: Wan Azizah is not fit to be MB

“There is a series of criteria needed for one to be eligible as a leader.
“For example, among the skills (Dr Wan Azizah) must possess is the ability to face (detractors) and answer hard questions in Parliament and the state assembly.
“If you can’t hold your own in a debate with opposition members in the (Selangor) state assembly, how can you lead (in a vastly larger role)?” Hadi said in Marang here, when asked by a Pas member during a dialogue as to why the party would not accept Dr Wan Azizah as the menteri besar.


Hadi, who was once a Terengganu MB, however did not list down the exact criteria of a good MB.

I am not very familiar with Hadi's performance as an MB which was between 1999 and 2004, as I was still a bit young and hardly been to Terengganu at that time.

Yes, just yesterday an elderly PKR supporter told me that he believed that Hadi is taking bribe from Umno as he has four wives.

Hmmm...if I was not mistaken, Hadi only has two wives.

Terrible la the way these Pakatan people come up with such stories when they don't like certain people.

Just look at the way they smeared the name of TS Abdul Khalid Ibrahim, whom they once touted as the cleanest and most efficient MB ever.

Anyway, what does it takes to be a good MB?

Well, I know one good MB.

Let me list down ten good things that I knew about him while he was in office.

1. He doesn't talk much but works hard. He is also incorruptible.

2. When he became MB, the first thing that he did was to disperse development efforts to balance between those in the urban and rural areas, taking huge risks by giving priority to low-key but crucial projects such as building better roads in the villages throughout the State.

3. He didn't hoard the State government's money in order for its budget to look good but instead spend it on development projects for the people.

4. He never neglect the needs of the minority communities, providing them with assistance and financial allocations for things close to their heart such as vernacular schools, NGO activities, temple upkeeps etc.

5. At the same time he undertook serious efforts to uplift the lots of the majority bumiputera by creating for them opportunities, especially in education, trade and commerce.

6. Being very passionate about his Malay roots, he tried to inculcate a sense of self belonging and pride among his fellow Malays in the State through several programs so that they could be proud of their culture and attain a high level of self confidence.

7. He initiated quite a number of initiatives such as a "membudayakan AlQuran" program in the work place to promote the moderate and progressive Islamic practices which the State is famous for.

8. He has a lot of ideas for the betterment of the State. One of his good ideas which he presented to the Federal government had turned into a major development initiative designed to propel the growth of not just the State but the entire country.

9. As the MB, he gave good advises to the Sultan of the State, instead of accepting bad advises from all sides.

10. He served his State well as its MB for almost two decades and when he was told that he had to go, he walked to the sunset without kicking up a fuss despite being badly treated during his final days in office.

Okay, to me, that was one good MB.

You all can guess for yourself.