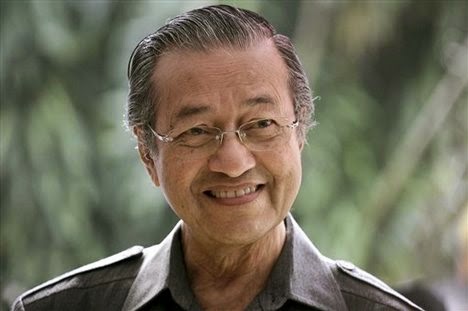 My comments in blue

“I did not ask him to resign. I said I will resign if I’m made the PM now. I'm too old

"I don‘t support him. I’m not supporting him anymore, that’s all.”

“When somebody does something and you think it is wrong you have the right to say so… the Malays call it menegur. There is nothing wrong in menegur. When I was Prime Minister, Rafidah (Tan Sri Rafidah Aziz) used to tell me in my face when she doesn’t like my ideas. She remained as a minister.”

On the current state of Umno

"The divisions will be preoccupied with their own position. They don’t see the things they should be seeing, they ’re not well informed about things because if they read the newspapers, the newspapers are very shy about making criticisms, so they also will not be making any criticisms”.

Most Umno people are still finding it difficult to change their attitude. Dr Mahathir was worried that they will continue chasing after their own personal interests instead of working for the people, especially Malays and the bumiputera. If this continues, Umno will perform even worse in the next general election.

On the Selangor leadership crisis

“During my time I only submited one name and I have no problem with any Sultan. You can’t annoy people and then expect them to cooperate with you. What they (Pakatan Rakyat) have been doing is to annoy not only the Sultan but everybody else with all their bickering, running each other down and then you are going to appoint someone who is going to take orders from someone else. I mean this remote controlled MB is not acceptable to anyone."

The saving grace for Umno and BN is that Pakatan is in an even worse situation. They are over confident and arrogant, feeling that they can shove everything down the people's throat. Dr Mahathir said that's why they mess up so badly in Selangor.

Sedition Act is just the gun. It's the person who pulled the trigger who is responsible.

Note: Quotes by Dr Mahathir are from The Mole's report

Dr M: I didn't ask the Prime Minister to resign but I no longer support his leadership
Posted by Annie at 14:06