I just discovered that the link to Syed Akhbar Ali's blog which I provide in this post is no longer available. His blog archive except for the last two posts has also similarly became unavailable. I hope Syed Akhbar is okay.

Okay, I was beaten to this one by Syed Akhbar Ali.

It's about Khazanah buying back the land in Iskandar Malaysia that it sold to some Arabs.

This reminds me of several old postings by my friend Ai in the now mostly mothballed BIGCAT blog.

That posting was done back in 2011. There are others, which you can find at that link.

This particular comment which was published in that posting really got it spot on in relation to what is now allegedly happening at Iskandar Malaysia,

Funny enough BigCat...you put the map of Medini in this writeup. Perhaps you might want to find out more on how the Medini land deals were structured with the Arab Consortiums and a Sri Lankan individual, who hides behind few companies registered in British Virgin Island. How the hell Khazanah signed the deal with these suspicious companies is a mystery.

You will find out that the deal involved:

1) I sell to you Medini land at x dollar, but you can sell back to me at x+y dollar. (Never mind if you make profit y dollar from me atas angin).

2) When I sell to you at x dollar, you pay me in many INSTALLMENT over few years. But when you sell back to me at x+y dollar, I IMMEDIATELY pay you cash. (Never mind if you actually RECYCLE my money to pay me as the original land owner).

3) In addition, if you feel that you cannot make 20% profit from the land plots, you can return the land back to me, and I pay you higher at x+z dollar. (Never mind if you actually pass all the business risks to me because I am stupid).

3) Together we create many vehicles to undertake projects on Medini, we use government money to fund those projects, either using grant of soft loans. (See, the government cannot let us fail).

Let's not kill the excitement BigCat. You need to do some investigative journalism. Ask MACC if they are aware about this. By the way, all these agreements were signed by Khazanah people on behalf of IIB.
28 December 2011 21:31
It's now really happening.

I suspect this could spell the end of Iskandar Malaysia.

Too many hanky panky and bungling down there.

I was told that even the banks are also now not very keen to provide financing for anyone with projects there.

One of the questions these bank people were asking around was that - are there going to be any interference from the powers-that-be in Johor if they put their money on such a project there?

Most could not, or would not answer the question.

I also heard from a journalist friend that the situation was so worrying that MB DS Mohd Khaled Nordin is going to give a press briefing to some "friendly journalists"  to explain the massive reclamation projects now taking place stretching from Stulang to the Second Link along the Tebrau Straits.

I was told that it was feared that the negative publicity generated by the influx of Chinese companies in those projects may hasten the death of Iskandar Malaysia.

Well, only now that it has reached this point, that they want to do damage control.

I don't know what Khaled will tell his journalist friends, but it should better be convincing.

Hopefully it's not going to be another half past six explanation which even someone like me, who is not a professional can shred to pieces.

I heard Khaled will be assisted in the briefing by Iskandar Regional Development Authority (IRDA) chief executive Datuk Ismail Ibrahim. 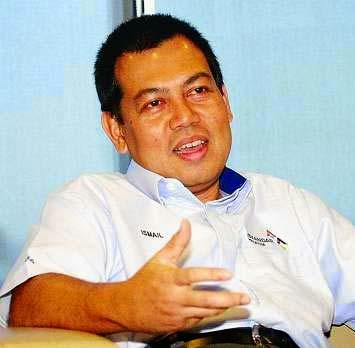 Well, Mail, I hope you can help Khaled with answering all the hard questions, if there are any.

I know that the journalists who will be there are all considered as "friendlies" but who knows, they may be curious to know more than what you all going to spoon feed them.

Oh, before I forgot, Mail, how was Batam the other day? You play golf there or not?

Anyway, no need la you bring along an entire IRDA team to that island. Where got potential investors in Batam? Wasting tax payers money only la. You want to play golf and have fun just go alone la. Can or not?

Oh, also, next time don't la go fooling around in places like Batam when the Prime Minister come down to JB for a visit. Not nice, you know.

Well, these are all why Johor is in a lot of trouble now.
Posted by Annie at 14:17