It's a few days more before Hari Raya.

Somehow, at the moment I don't really feel very enthusiastic about it.

Maybe it got something to do with the gloomy atmosphere following the MH17 tragedy and the yet to be solved MH370 fatal mystery.

Or maybe it's because of my worries over Johor.

Except for the new baju kurung bought for me by my friend Aisya, there was nothing else in term of my preparations for Hari Raya.

I need to later buy a matching selendang to go with that attire though.

Well, I will dress myself up in the baju kurung to look a bit like a proper Malay girl and kiss my father's hands on pagi Raya.

My mother don't really care much about all that but she will also be there.

I know that she will, as always, put up a show for my father to make him happy.

Hari Raya is the only time she ever try to pretend to be a bit of a Malay, wearing a baju kurung and speaks more in Bahasa around the house.

I also play along.

We will even cook some ketupat. 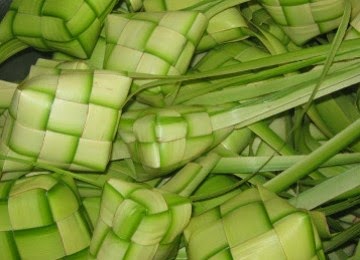 My mother learned to weave the ketupat from a friend a few years back. She would purposely put up a show of weaving them in front of my father in the kitchen a day before Raya so he can have a bit of suasana Hari Raya.

My mother said it makes a lot of difference between weaving the ketupat ourselves rather then buying the already made ones at the market. Having the instant ketupat in plastic bag like many do nowadays is a complete NO for my mother.

I tried to learn weaving ketupat from her over the past few Hari Raya but is still struggling with it.

Nonetheless, it's quite fun doing it with my mother.

My mother had also practiced cooking rendang but I believe it was of much less success. Her rendang, despite her best effort, is still rather not good.

Sometimes I think she is going overboard with trying to please my father for Hari Raya.

The other day she told me to get rid of the red color of my dyed hair.

"You don't want to look like a Chinese harlot on Hari Raya, okay," she said.

But still, I think she got a point there. Had set up appointment to re-do my hair for tomorrow.

Anyway, I am not going to balik kampung.

My father's side of the family are all living in KL now. No one left in our hometown Kluang.

My Malay grandmother passed away before I was born while my grandfather, a few years ago.

The old kampung house was sold off as there was no one to look after it.

I remember the house well as I enjoyed it every time my father took me there when I was a little girl.

There were several rambutan and cempedak trees around the house.

My father was always in charge of cooking the ketupat, using a makeshift stove outside the house, fueled by wood collected from a nearby rubber small holding.

He would stay up the whole night to make sure the ketupat were properly cooked.

It was a lot of fun. A bit like a camp fire. I remember playing bunga api with my cousins, running around the series of lampu minyak tanah put up by my grandfather around the courtyard.

My aunts and uncles would also be there, working together to prepare the food for the big day.

All that seems such a long time ago.

I guess, things have to change with time....sometimes not for the better.

Anyway, no politics or serious stuff for today.

Just want to relax and try to hype myself up a bit for Raya.

Well, hope you all have a good suasana Aidilfitri over the coming days, okay.
Posted by Annie at 06:38